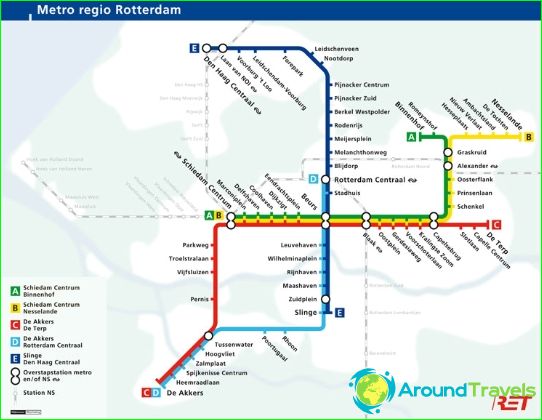 Rotterdam metro map
The Rotterdam Metro connects the city center and surrounding municipalities. This is the main function of the metro, since the central part of the city is successfully served by the upper public transport. Due to the fact that the distances between stations are relatively long, the average speed of metro trains is quite high..
The first North-South line was opened in 1968, it was laid under the Nieuwe-Meuse river and connected the Centraal and Zuidplein stations. It was the first metro in the Netherlands. At the same time, it was one of the smallest subways in the world - the length of the line was only 5.9 km..
In 1982, a second East-West line was opened between Capelsebrug and Coolhaven stations. In the late 1990s, the lines were put into operation North - South, and then East - West. Since December 2009, these names have been replaced with more informative combinations of letters and colors, so that the difference between individual branches is more obvious and descriptive..
The subway occupies a small part of the metro, the main part runs on the surface or above the ground along the overpasses. The reason for the implementation of such a project is that construction was carried out on undeveloped areas and the likelihood of flooding, since most of the city's districts are below sea level.

Tickets (disposable and rechargeable chip cards) for the Rotterdam Metro are valid on any public transport in the city. Tickets can be bought at vending machines in stations, kiosks and shops; some types of travel cards can be purchased from tram and bus drivers. Discounts apply to children from 4 to 11 years old and senior passengers over 65 years old. Free travel for children under 4 The best option for city guests is to purchase the Rotterdam Welcome Card for 1, 2 or 3 days, which will allow you to travel unlimitedly around the city and visit more than 250 of the best attractions: museums, theaters, restaurants and clubs in Rotterdam.

Photos of the Rotterdam metro