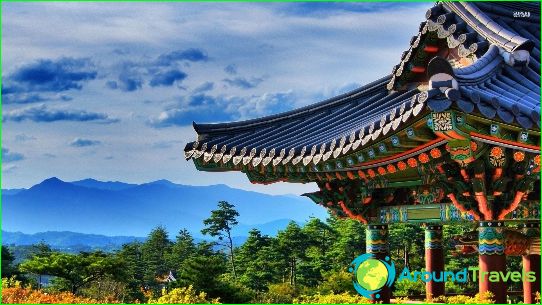 Despite the political and geographical division of Korea into North and South, cultural traditions for both countries continue to be common. As neighbors, the countries share the same historical roots, the same architectural style, similar music and folk dances. If you do not take into account the modern differences in political and economic life between these states, we can say that the culture of South Korea has concentrated many Korean traditions and principles of life..

Scenes of the day on silk

It was silk that became the main material for the creation of paintings for Koreans. He was painted by masters using ink, with which the artists created drawings of unique beauty and grace. The main characters of Korean artists are ordinary people, and the painters drew their plots from ordinary life. Working with ink on mulberry paper has formed a special direction in the culture of South Korea - the art of calligraphy. The writing of hieroglyphs and graphic drawings was called a rare skill, and such painters became court masters, leading the chronicle of the life of the imperial dynasty..
However, the earliest works by Korean artists date back to the ancient times. Petroglyphs with images of animals and hunting scenes were found by archaeologists on the territory of the Korean Peninsula..

Folk crafts are no less important in the culture of South Korea. Unique handicrafts can be seen today in the best museums in the country and in the homes of ordinary Koreans. Inlaid dressers, ceramic vases, pottery, bronze dishes and porcelain figurines are just a small part of the huge list of utensils and household items created by Korean craftsmen over the centuries..
By the way, the first pottery appeared on the peninsula in the Neolithic era. By the 12th century, the production of ceramics had reached ideal perfection, and the method of inlaying products with glass, stones and mother-of-pearl that appeared at the same time is considered a truly Korean know-how..

East is a delicate matter

Korean cultural traditions include the principles of building a house or planning a territory on a site. Buildings are placed, if possible, with the front facing south in order to have more solar energy. The area of ​​the house should not exceed certain dimensions, since only the king is allowed to live widely. Despite the development of modern construction, old houses made of wood, clay and straw are still preserved and used in South Korea..