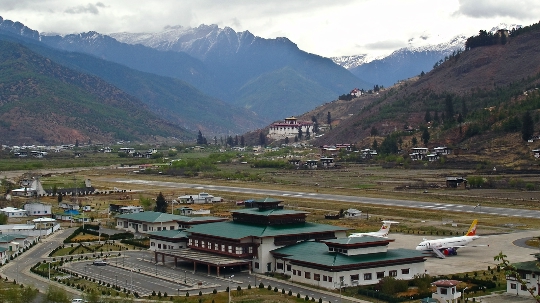 Traveling to exotic Bhutan, sandwiched between the huge Himalayan mountains, is not cheap, but worth it if you want to find yourself in a land that was practically isolated from the outside world a couple of decades ago. Bhutan airports do not have a direct connection with Russian ones and you can get there from Moscow or St. Petersburg only with a connection in Delhi, Bangkok, Mumbai or Kathmandu. The total time in the air will be about 9 hours, excluding the transfer.

The only airport in the country that has the right to receive international flights is located in the west of Bhutan. The city where the airport is located is called Paro and the air harbor has the same name..
The airport of Bhutan in Paro can rightfully be called high-mountainous - it is built at an elevation of 2230 meters above sea level. This aerial gateway in the Himalayas is considered one of the world's most difficult pilot sites because it is surrounded by five-thousanders..

How it all began

The airstrip in the Paro Valley in Bhutan was built in 1968 and was first used for helicopter operations by the government of Bhutan. The take-off length was initially only 1200 meters and the airport could not receive large planes.
Reconstruction of the Bhutan airport made it possible to lengthen the runway up to 1964 meters, which made it possible to receive aircraft of the Airbus-319 class here. The passenger terminal was commissioned in 1999 and annually is used by up to two hundred thousand people.

Only under visibility conditions

The climate of the country also makes Bhutan airport difficult to operate. Due to frequent fogs and precipitation in the highlands, Paro works only during daylight hours. Its only runway is not designed to receive especially large airbuses, and therefore a limited number of airlines fly here:

Transfer from the airport to the city can be ordered at the hotel or by taxi. The passenger terminal and the center of Paro are only six kilometers apart.

In addition to Bhutan's international airport, there are three other airfields in the country, the activities of which are temporarily suspended or have not yet begun. Yongphulla, Bathpalathang and Gelephu airports have asphalt runways, but as of 2015 they do not serve passengers..