Home › Different countries › Flag of Lesotho: photo, history, meaning of the colors of the national flag of Lesotho 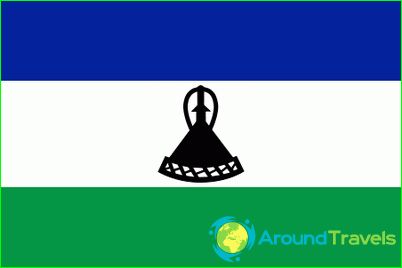 The flag of the Kingdom of Lesotho was officially adopted in October 2006 and is, along with the anthem and coat of arms, the state symbol of the country.

Description and proportions of the flag of Lesotho

The flag of Lesotho has a rectangular shape, like the bulk of the state flags of independent countries on the political map of the world. The length and width of the flag are related to each other according to the proportion of 3: 2.
The flag of Lesotho is divided horizontally into three fields of equal width. The top stripe is bright blue, the bottom is light green, and the middle of the flag is white. In the center of the cloth, within a white field, there is a stylized image of a spit-mouth. This is the traditional headdress of the tribe inhabiting the state of Lesotho. It is shown in black.
The white stripe on the flag symbolizes the peace that the people of Lesotho have long sought. Blue is a tribute to water, without which there is no life on earth. Water is the most valuable treasure on the African continent. A green field on a banner means prosperity and hope for a better future.
Lesotho's flag, according to the country's law, can only be used on land by government agencies. It can also be raised on private ships or serve as an identification mark of belonging to the state on ships of the merchant fleet..

History of the flag of Lesotho

Lesotho's very first national flag was adopted on the country's independence day in October 1966. It was then that Lesotho gained sovereignty and ceased to be a British protectorate. The first version of the flag of independent Lesotho was created based on the colors of the banner of the Basuto National Party, which led the country to independence. The flag was a cloth, the main field of which was bright blue. On the left along the shaft were two vertical narrow stripes of green and red. On the blue field, the image of the national headdress was applied in white.
The 1987 military coup brought about changes in the political structure of the state. The new flag was adopted immediately after these events and its banner was divided diagonally from bottom to top and from left to right. The left white triangle contained the image of a military shield with a spear, and the right light green was separated from the white by a blue stripe.
In 2006, in honor of the 40th anniversary of the proclamation of independence, a new Lesotho flag was adopted, which is still the state.