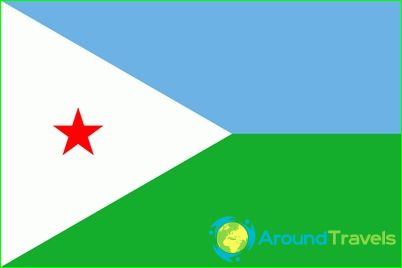 The flag of the Republic of Djibouti was formally established in June 1977 when the country gained independence from French colonial rule.

Description and proportions of the flag of Djibouti

The rectangular flag of Djibouti is divided into three fields, each of which has its own color. From left to right, a white equilateral triangle is cut into the flag field, the side of which is equal to the width of the panel. In the center of the white triangle is a red five-pointed star. The remaining area of ​​the Djibouti flag is divided horizontally into two equal parts. The top bar is blue and the bottom is light green.
The colors and symbols on the Djibouti flag are important to the people of the state. The blue field symbolizes the waters of the Indian Ocean, while the green field represents the land on which farmers grow their main crops. In addition, blue and green are the historical colors of the two main tribes inhabiting Djibouti. The white triangle on the flag of Djibouti is the desire for a peaceful life, which is supported by the memory of the shed blood of patriots in the struggle for independence. The symbol of the heroic past of the people and their current unity is the red five-pointed star.
The colors of the Djibouti flag are repeated in the country's coat of arms, which is the official symbol of the state, along with others. The green laurel wreath depicted on the coat of arms embraces an African shield with a spear, flanked by hands holding blue swords. The red star on the coat of arms of Djibouti underlines the unity of the Issa and Afar tribes living in Djibouti,
The sides of the Djibouti flag are related to each other in a 3: 2 ratio. The cloth is approved for use on land and water. It can be raised by both the country's officials and ordinary citizens. The Djibouti flag flies on the flagpoles of government agencies, and army ground units, and warships of the Navy.

History of the flag of Djibouti

The colonization of the territory of today's state of Djibouti began in the 19th century. By 1862, the French government officially received the first controlled areas from the Sultan, and by 1896 the land was called the Coast of French Somalia. Throughout the period of colonial rule, the flag of France was used for Djibouti.
In June 1977, a treaty of sovereignty and independence was signed, and a new flag of Djibouti was adopted, which remains unchanged to this day..