Home › Different countries › Flag of Iceland: photo, history, meaning of the colors of the national flag of Iceland 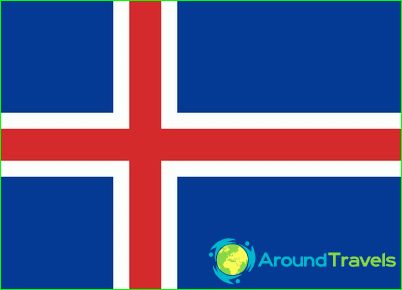 On June 17, 1944, the official law approved the state flag and coat of arms of the Republic of Iceland, which became integral national symbols of the state..

Description and proportions of the flag of Iceland

Iceland's rectangular flag has somewhat unusual proportions compared to the flags of other countries. Its width is related to length as 18:25.
Iceland's civil flag has a blue base color with a snow-white cross on it. Red is applied inside the white cross. The ends of the cross reach the edges of the cloth. The width of the red cross has a ratio to the width of the flag as 1: 9, and the width of the white as 2: 9. The four blue fields of the flag, formed by the intersection of the lines of the white cross, are rectangles. The rectangles located along the shaft have the same width and length, while the length of the outer margins is related to their width as 2: 1.
The colors of the Icelandic flag were not chosen by chance. The National Flag Act describes it as blue as the sky and Atlantic waters that wash over the island. The red color symbolizes for the inhabitants of the country the fire of the famous volcanoes of Iceland, and white - the endless ice and snow of its expanses.

History of the flag of Iceland

At the end of the 19th century, the first flag of Iceland was a snow-white cross on a blue field. In 1915, Denmark recognized Iceland's right to have its own national symbol, and the flag flew over government offices. Three years later, Denmark officially agreed with Iceland's sovereignty, and a red cross appeared on the white field of the cross..
In the 40s of the last century, the blue field of the flag darkened somewhat, whereas before that it was more of an ultramarine shade..
Official laws provide for a certain protocol for hoisting the Icelandic flag, according to which it cannot appear on flagpoles before seven in the morning. The lowering of the flag, according to these rules, should be done before sunset, but if circumstances do not allow this, then at least before midnight.
Icelandic flag hoisting days are stipulated by special provisions. The main national holidays, Easter, Christmas, birthdays of royals and the Sailor's Day are accompanied by the indispensable appearance on the flagpoles of the national symbol of the country.
The law requires the owners of flags to treat them with respect, to monitor their condition and appearance. Insulting the flag of Iceland not only by action, but also by word is punishable by imprisonment.

Children's camps in Sochi for the summer. ...