Flag of Sudan: photo, history, meaning of colors of the national flag of Sudan 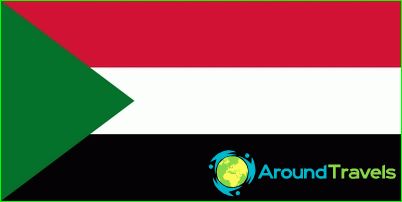 The national flag of Sudan was officially approved in May 1970 when the country was renamed the Democratic Republic of Sudan. In 1985 the state became known as the Republic of Sudan, but the flag remained unchanged..

Description and proportions of the flag of Sudan

The rectangular shape of the Sudan flag is typical of the flags of almost all independent world powers. It is a panel whose length is twice the width and is related to it according to a 2: 1 ratio.
The flag of the Sudan has three horizontal stripes of equal width in red, white and black when listed from top to bottom. From the side of the flagpole of the Sudan, a dark green isosceles triangle is cut into the body of the cloth for about one quarter of its length. The colors of the Sudan flag are typical of the Pan-Arab powers and are represented on the flags of other states in the region..
The red field of the Sudanese state symbol reminds of the struggle for the sovereign rights of the country and the blood that the patriots gave in the battles for independence. The white stripe traditionally symbolizes the peaceful aspirations of the people and their desire for equal partnership with other countries. The black part of the flag represents the state of Sudan, whose name in Arabic means «country of blacks». The green triangular island is a tribute to Islam, which is professed by the absolute majority of the Sudanese population. The green field of the Sudanese flag also means agricultural traditions that have long roots in this country..
The four colors of the Sudan flag are also present on the country's coat of arms. A black secretary bird on a white background holds a red shield on its chest and rests on the name of the country inscribed in green. The top of the coat of arms is a white ribbon with the motto of the state executed in green Arabic script.

History of the flag of Sudan

Initially, the flag of the Sudan was considered to be a cloth of blue-yellow-green colors, officially adopted in January 1956. It was then that the country gained independence, and the British and itsoptics left it and withdrew their troops..
On the previous flag, the upper blue field symbolized the main river in Africa - the Nile and its importance in the life of the people of Sudan. The yellow stripe meant the sand of the Sudanese deserts, which cover most of the country. The green part of the former Sudan flag reminded of the fertile land on which the inhabitants were engaged in agriculture..

Photos of the flag of Sudan