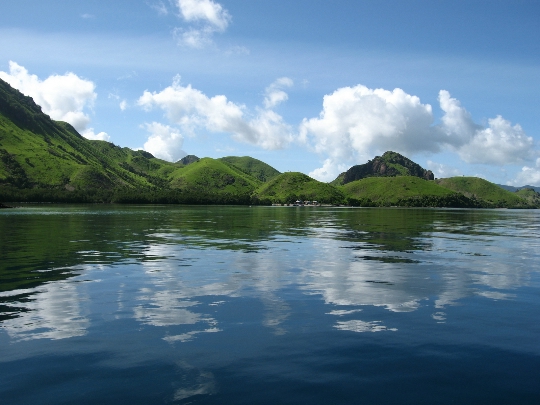 The Malay Archipelago is the location of the Flores Sea. It is an inter-island body of water in the Pacific Ocean. It stretches between the islands of Flores, Sumbawa and Sulawesi. The Flores Sea is bordered by the Banda, Sava and Javanskoe Seas. Its water area covers an area of ​​about 115 thousand km. sq. The deepest point is 5234 m, the average depth is just over 1520 m. The upper layer of water warms up to +26 degrees in summer, and up to +28.8 degrees in winter. At the very bottom, the water temperature is 3.5 degrees lower. There are deposits of volcanic and globigerin silt at the bottom of the sea.

The Flores Sea map allows you to see the island of Sumbawa, on which the most active of the active volcanoes in Indonesia, Api Slau, is located. It reaches 1949 m in height. In the west of the water area, there are a lot of coral formations, reefs and the Flores deep-water depression. The sea got its designation from the island of Flores, named by the Portuguese «Cabo des Flores», what does it mean in translation «cape of flowers». This name is explained by the fact that all the islands of the sea have abundant tropical vegetation..

The landscapes of the tropical sea are volcanoes, forests, bays, savannas, sandy beaches, caves and bays. The coast of the Flores Sea has a low-lying landscape, where savannah alternates with rainforest. In mountainous areas, evergreens of the tropics and conifers grow. Palm trees, bamboos, ficuses, etc. grow on the territory of the islands. In the subequatorial climate near the coast there are mangrove and monsoon forests, savannas.

The conditions of the equatorial and subequatorial monsoon climate prevail in the sea area. Nature obeys the tropical monsoon regime. The dry season on the islands is the period from July to November. In coastal areas, the air temperature is +27 degrees. The water area is characterized by powerful, but short-term showers. Flores is very humid on the coast of the sea. In the rainy season, the humidity is 90%, and at other times - at least 80%.

Significance of the sea

The area of ​​the Flores Sea is considered to be seismically active. Here volcanoes periodically erupt and earthquakes occur. The population of the islands is engaged in whaling. Catching whales in the area is permitted. Fishing is popular here. Residents fish for tuna, herring, mackerel, mackerel. Fishing for sea turtles, shrimps, and crayfish is important. The vibrant underwater world makes the Flores Sea attractive to divers. Among the inhabitants of the reservoir there are lionfish, sharks, catfish, stingrays, butterfly fish, etc. The main seaports are Sumbawa and Bontain.

Airport in Shanghai: scheme, photo. How to ...