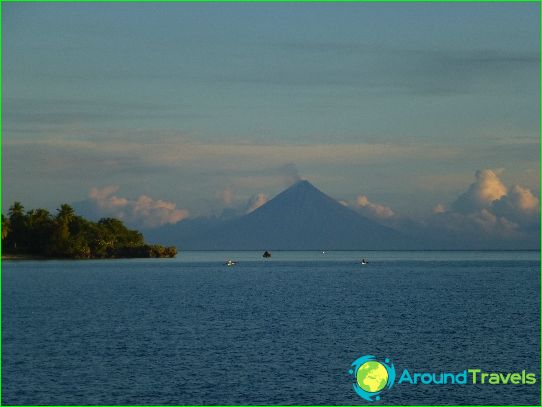 The inter-island Sibuyan Sea is located within the Pacific Ocean basin. Its water area stretches between the points of the Philippine archipelago: Tablas, Panay, Luzon, Masbate and Marinduke. Between the islands of Mindoro and Luzon, there is the Verde Strait, which connects the reservoir with the South China Sea. In the southern part, the Sibuyan Sea is bordered by the inter-island seas Samar and Visayan.

The depth limit of this sea is 1700 m. The island of the same name is located in the central part of the water area, as the map of the Sibuyan Sea shows. Deep places were found in the center and in the west of the water area. In other areas, shallow water prevails. There are many reefs, shoals, banks and rocks in the south and east of the sea..

A tropical climate prevails in the sea area and on the islands. The coastal areas are always warm and humid. In the summer, the amount of precipitation increases. In the central parts of the islands, the climate is drier.

The water has a temperature of about 23-29 degrees. The reservoir is distinguished by semi-daily irregular tides, during which the water rises to 2 m. Hurricanes and typhoons often occur here. No more than 3000 mm falls in the water area per year. precipitation. The salinity of the water is 33-33.5 ppm.

Features of the natural world

The coast of the Sibuyan Sea is a tropical paradise where you can see rare plants. The coastal waters are rich in shellfish and colorful fish. Among the inhabitants of the sea, pearl oysters are especially attractive. The islands have wonderful vacation spots. The tropical mild climate creates favorable conditions for diving. Dives can be done in any season.

A popular tourist destination is Boracay Island, where the best beach on the planet is located. There are also many vacationers on the Marinduk island, which is famous for the wealth of the underwater world. There are coral formations, caves, shipwrecks. Naval battles took place here in the last century, leaving behind sunken ships.

Sibuyan Island is located in the Romblon Province (Philippines). It covers an area of ​​no more than 445 km2. sq and is distinguished by a crescent shape. Almost half of the island is covered with tropical forests, which have not been affected by civilization. In 1996, part of this island was declared a protected area. The population of the Philippines is engaged in fishing, agriculture, and hunting. Frequent earthquakes are a significant disadvantage of the islands, since seismic activity is increased in this region. However, this feature does not scare off vacationers who are drawn to the coast of the Sibuyan Sea from all over the world..

Photos of the Sibuyan sea