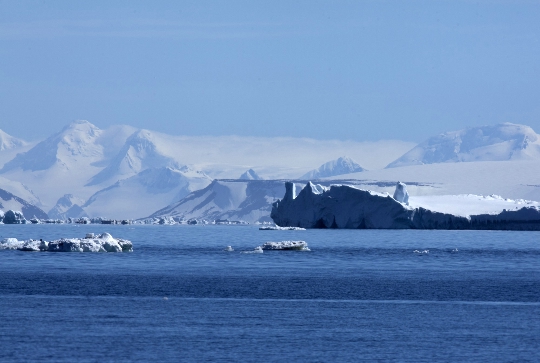 The southernmost sea on the planet is the Weddell Sea. Floating ice floes and icebergs cover it almost all year round. A map of the Weddell Sea allows you to determine its location: near West Antarctica, between Coots Land and the Antarctic Peninsula.

This is the oldest sea, which still remains poorly understood. The whaler and seafarer Weddell (Scotland) is considered the discoverer of the reservoir. He got into the sea in 1823 while hunting for seals. The Weddell Sea is also called «Ice bag», as ice is compressed here.

Features of the sea

The southern part of the Weddell Sea is covered with ice shelves. The largest of them are the Filchner and Ronne glaciers. Previously it was believed that they are one. Their total area is approximately 422 420 sq. km. The ice in some places has a thickness of about 700 m. Huge icebergs, starting to sail in the northern direction, break away from the glaciers. The iceberg, which separated in 2000, had an area of ​​over 5340 sq. km. Gradually, small icebergs break off from large icebergs, drifting across the oceans.

The Weddell Sea, together with glaciers, covers more than 3 million square meters. km. In winter, the water in the southern part of the water area drops to a temperature of -1.8 degrees. Its density increases during this period of the year. The Weddell Sea has the highest salinity and density in Antarctica. Elsewhere, melting glaciers are desalinating Antarctic waters.

Life in the Weddell Sea

The cold reservoir is inhabited by cetaceans and fish. Plankton, which is carried into the upper layers of the water by the current, serves as food for them. This sea is one of the cleanest, transparent and coldest in the world. The transparency of the water is 79 m. The most common species of animals is the Weddell seal. It was discovered in 1820 by James Weddell. The seal reaches 3.5 m in length. He can stay under water for at least an hour..

There are almost no people on the Weddell Sea coast. Only specialists employed at polar stations live there. These are Halley Bay (England), Belgrano II (Argentina), Aboa (Finland) and others. The sea is considered the most dangerous place in Antarctica. In the old years, ships entered its water area very rarely. Among the glaciers, the Weddell Sea is difficult to find. In addition, there is such a phenomenon as «flash freeze»: water freezes in front of people, and ice fetters the ship.

The sea is unsuitable for navigation. Icebergs, which appear suddenly, and circular flow are also unfavorable factors. Therefore, fishing vessels do not enter the Weddell Sea. It is visited only by researchers and tourists. Despite this, this territory is the object of claims of countries such as Argentina, Chile, Great Britain..