Home › Different countries › Flag of Zambia: photo, history, meaning of the colors of the national flag of Zambia 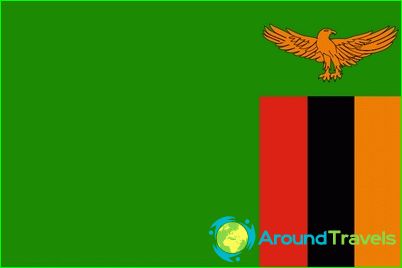 The state flag of the Republic of Zambia was officially approved in October 1964, when the country ceased to be a British colonial possession..

Description and proportions of the flag of Zambia

The rectangular flag of the Zambian flag was created by the artist Gabriela Ellison, who also proposed the country's coat of arms, approved by the government at the same time as the flag..
The main field of the Zambia flag is green. In the lower right part of the panel there is a rectangular insert of the vertical direction. Its length is two-thirds of the width of the Zambian flag, and its width is one-third of its length..
The insert is divided vertically into three fields of equal area. The stripe closest to the free edge is dark yellow, the middle one is black, and the inner margin of the Zambian flag insert is red. Above a three-lane inset on a green field in the outer upper corner of the flag there is an image of an eagle, whose head is turned to the left and whose wings are open. Its color matches the color of the outer stripe on the insert.
The aspect ratio of the flag of Zambia is 2: 3. The flag was adopted for use by all land organizations and state bodies of the country, its troops and civilians.

History of the flag of Zambia

As a colony of Great Britain, the country was called Northern Rhodesia, and its flag was the state flag of Great Britain. In the 30s of the twentieth century, a flag was developed for the country, which was adopted in all colonial possessions of Her Majesty. On the blue field in the upper part closest to the pole was a canopy with the flag of Great Britain, and to the right of it was the coat of arms or emblem of a particular colonial possession. In Northern Rhodesia, such a coat of arms was the image of a yellow eagle holding a silver fish in its paws. The bird was applied to a heraldic shield, in the lower segment of which Victoria Falls was stylized.
Having joined the Federation of Rhodesia and Nyasaland in 1953, today's Zambia adopted a new emblem, replacing the eagle with a fish on the previous flag. Now on the flag there was a coat of arms in the form of a shield with a rising sun in the blue sky and a red lion, leaning on the stylized black and white streams of the waterfall.
This flag lasted until the last days of 1963, when the Federation collapsed, and modern Zambia continued its struggle for independence under the flag that became the predecessor of the modern one and differed from it only in the inscribed Latin "U". This letter symbolized the word "independence" in one of the local dialects.

Photos of the flag of Zambia