Home › New articles › Arkaim, Chelyabinsk region - we are going to the place of power

Arkaim, Chelyabinsk region - we are going to the place of power

Arkaim is an ancient city that existed many years ago. According to many people, it is a place of power. Arkaim is located in the Chelyabinsk region, and the easiest way to get to it is either from Chelyabinsk or from Magnitogorsk, depending on which train / bus it is more convenient for you to travel on..

The city of Arkaim in the Chelyabinsk region was one of the points of our trip. In order to get to it, we arrived in Chelyabinsk, where we learned that buses do not go directly to Arkaim, and we will have to walk part of the way.

The Chelyabinsk-Breda bus turned out to be small and dilapidated, they were traveling literally sitting on backpacks. We were dropped off at the turn to Arkaim and for 10 km we walked with backpacks on our backs. There were practically no cars. Games, songs and anticipation brightened our way ... 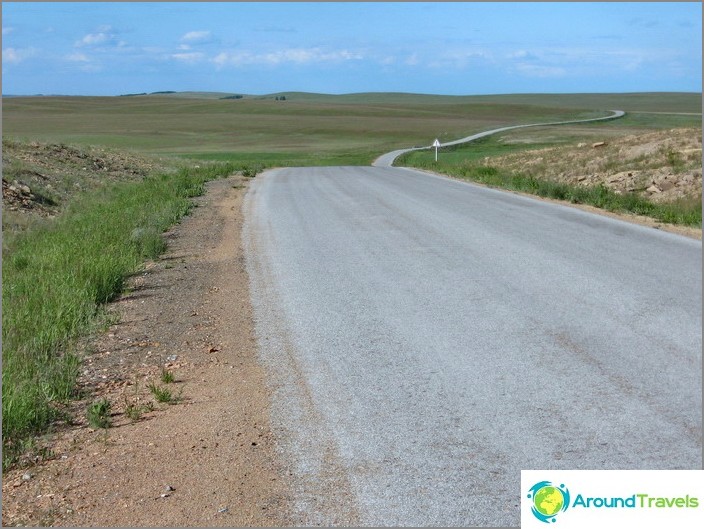 Arkaim. Chelyabinsk region. The way there.

When we got there, it was already evening. On the way, we met charming women who suggested to us that if we wanted we could rent a room in a nearby village, well, or at least go to the bathhouse there or buy fresh milk. We took note of this, but did not take advantage of it, since we had very little time..

Arriving at the camp, we found that you have to pay for the place. Our guys immediately paid for the day of our stay and the morning excursion to the city of Arkaim. We stood by the river and only then found that, it turns out, it was possible to settle outside the territory and for free, but it was already too late. As it happened, so it's better, we thought. 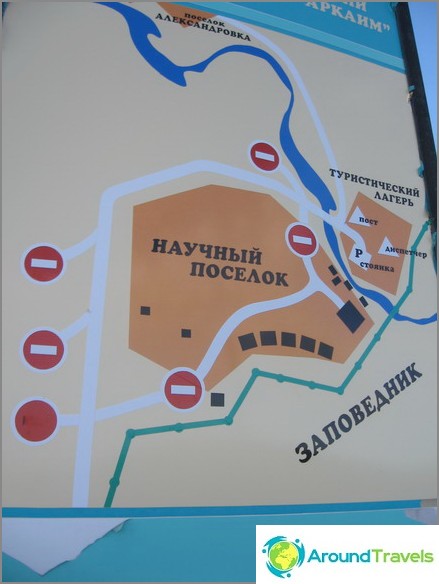 The more evening it got, the colder it got, and we realized that we couldn't do without a fire. But since this is a steppe area and, in addition, the territory of the reserve, it was forbidden to get firewood in the existing forest. How us «made happy» in the camp - they had to be bought. At the same time, we had to search for a rather long time for the one who in this camp is in charge of the secret key to the barn with firewood. Having procured a couple of logs, set up tents and had supper, we expected to sit by the fire, but that was not the case - the cold air currents from the water drove us through the tents and into the sleeping bags. Well, but went to bed early - that's good too.

The next morning we had to get up quite early, the guide was waiting for us at 7 o'clock in the morning. As we were explained, it is impossible to get to the territory of the city of Arkaim without a guide, since this territory is both a historical and archaeological museum and a natural reserve.. 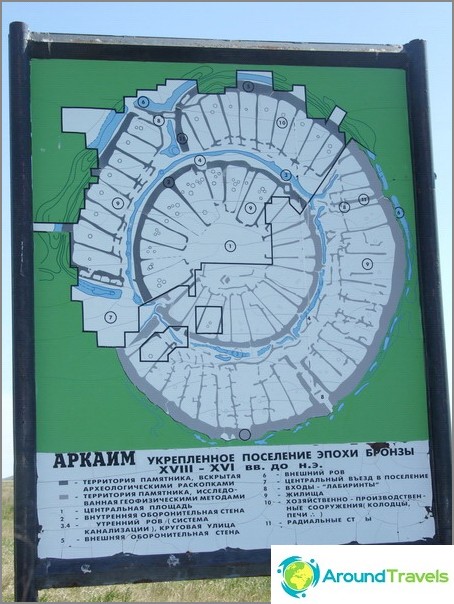 While we were walking to Arkaim, under the deafening cry of rooks, our guide told us exactly how they found this settlement. Several decades ago, they were going to make a reservoir on this territory. According to the rules, research work should be carried out before flooding the area, which, in general, was done. Archaeologists and geologists decided to flood the area, but on the last day of the scientists' stay, one of the trainees for some reason decided to fly over this field by plane. And, lo and behold, from above he noticed that, for some unknown reason, two circles loom on the surface, one in the other. It was impossible to notice this from the ground due to the tall grass and the not very pronounced expression of the circles. Of course, the flooding project was stopped and they began to study this strange phenomenon..

It turned out that the city of Arkaim of the Chelyabinsk region is an ancient settlement of the 18-16th centuries. BC. Of course, it was called then in a completely different way. The current name was given to him by scientists in honor of the mountain located nearby. Excavations began, during which half of the settlement was unearthed. It turned out that all the main exits from the city were oriented to the key positions of the sun on the days of the equinox and solstice. Unfortunately, it is difficult to find out the purpose of the city and who exactly inhabited it. According to some sources, this settlement was a large observatory, which means that scientists lived in it, according to others, Arkaim is the city of the most ancient civilization of the Aryans.

As the guide told us, this ancient settlement is unique in that it is a single layer (i.e., there is no stratification of cultural layers). This means that no one has lived in this territory either before that time or after. They left this city most likely due to the fact that the resources necessary for life were depleted in this area, for example, the forest that covered the nearby hills. Before leaving Arkaim, the inhabitants burned it all down. What remains of it is the surviving foundation and black footprints on the ground, left by burned-out pillars and stoves..

After excavation and research, Arkaim was again covered with earth, leaving only two of its segments for viewing, in modern terms - two apartments. In fact, these are just two areas cleared of grass, framed by bumps-foundations, with black circles left by the stove.. 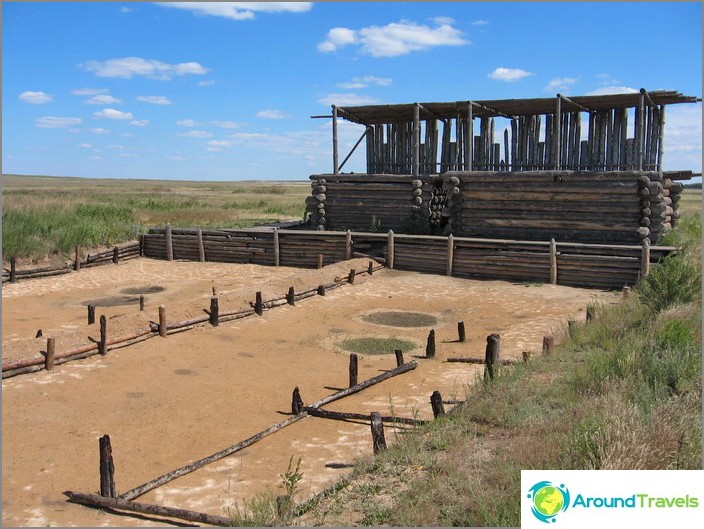 The peculiarity of the location of the Arkaim settlement (bordered by hills and crossing of two rivers) caused the uniqueness of flora and fauna, which is why the territory of the ancient settlement is also a natural landscape reserve.

It is very difficult to notice circles just standing on the field. The only time they can be distinguished is when the sun is hiding behind the clouds. Then you can see in some places «stripes» from a plant called feather grass. This is due to the fact that in the places where the foundation of the former city lies, the soil is much poorer and nothing but feather grass can grow on it.. 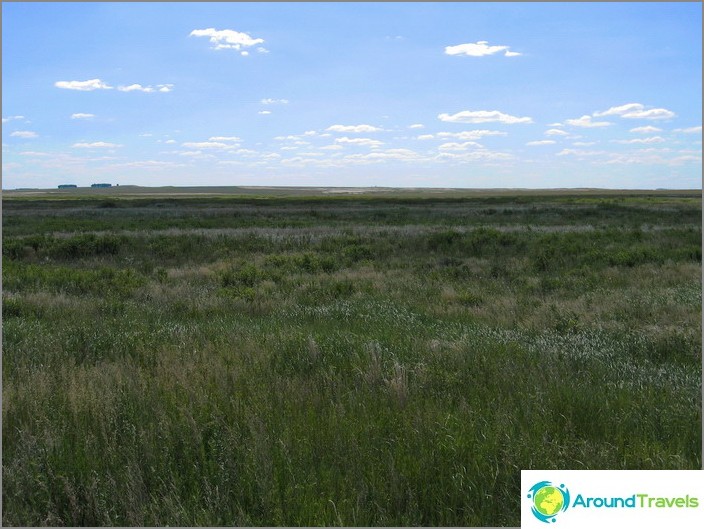 Arkaim. Settlement under the ground.

Honestly, when we were there, we hoped to feel something more than just an interest in a cultural and historical monument. But we did not feel any flows of energy and a surge of strength. Breathing there easily and freely, the mood was upbeat, but no more. The place of power did not manifest itself in any way.

What was our surprise when, leaving the city of Arkaim and passing through a wonderful birch grove, we climbed the Mountain of Love. Nobody expected such a sharp change in mood and sensations. We climbed for a long time, and then someone suddenly shouted: «Take a look around!». I looked around and sat down - I could not cope with the surge of strong emotions - such a beautiful view opens from the top! At that place I wanted to stay longer, sit, think, indulge in my dreams, analyze my life. Everything is learned in comparison, as they say ... 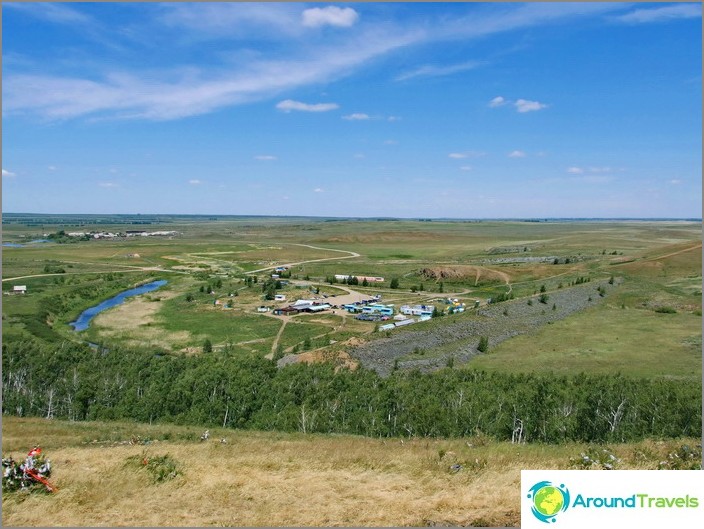 Arkaim. View from the mountain to the camp. 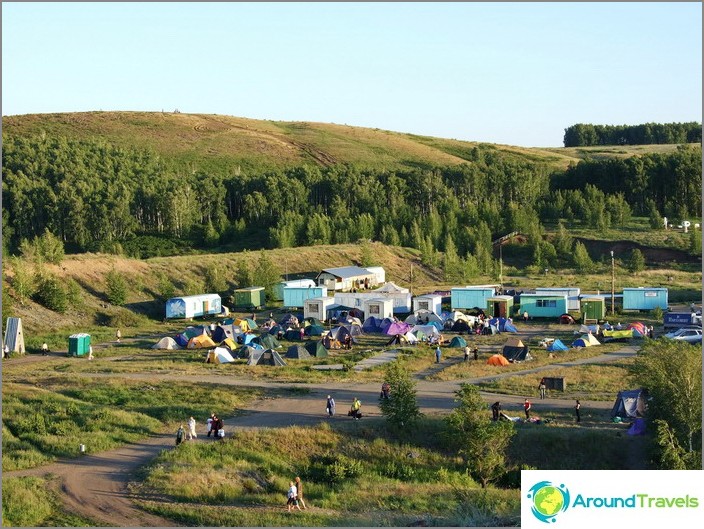 Returning to the camp in the late afternoon and having an excellent lunch, we decided to visit another remarkable place - Shamanka Mountain. Having dressed warmly, because In the late afternoon, the temperature difference was already very noticeable, we hit the road. Shamanka Mountain greeted us with a completely different mood. Unexpected gaiety, mischief and an extraordinary surge of energy made us tumble, jump, and run in a spiral of circles, laid out, as we were told, by the Hare Krishnas. It is likely that the nearby mountains are a place of power, about which they write and speak. And it may well be that energy was introduced here already in our time.. 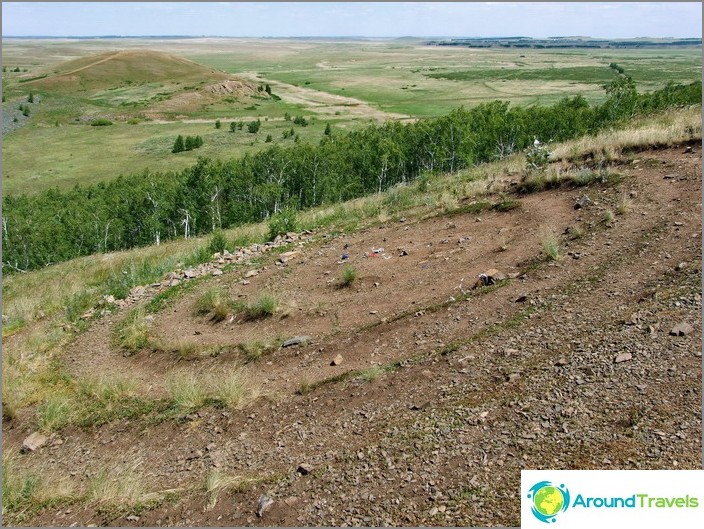 Arkaim. Circles on the mountain.

And under the sunset, people began to gather on the mountain. Gradually, mostly silently, everyone sat down on the western side of the mountain to see the sun off. An amazing feeling of unity with those people whom you do not know at all, with whom you are not only unfamiliar, but also did not say a few words! Peace and quiet, as if everyone was immediately covered with a thick large blanket. And the feeling of silence in the soul and peace ... 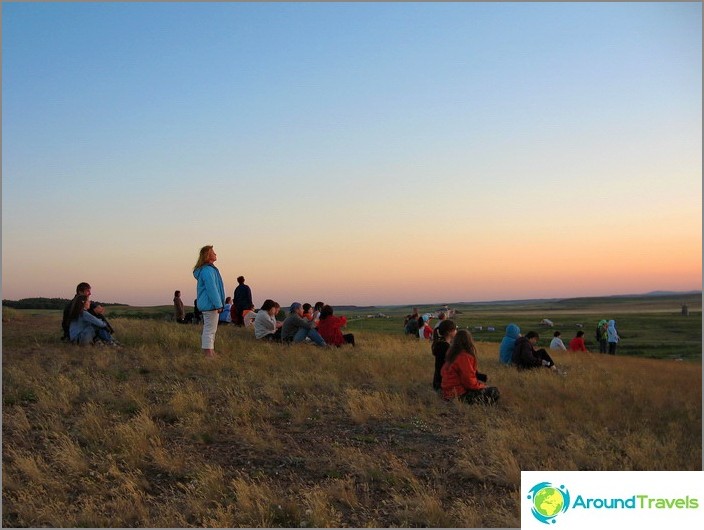 We did not want to leave Arkaim at all, but the rest of our travel points were waiting for us and did not leave us a choice. The guys were able to find out that early in the morning a minibus leaves the camp to Chelyabinsk, therefore, after sitting around the fire for a while, we went to bed early and slept very well, although none of us had any dreams

How to get to Arkaim

You need to take a train to Magnitogorskaya or to Breda station. There, take the Magnitogorsk-Breda bus and go to the stop «Turn to Arkaim».

In summer, buses go directly to Arkaim from the South Bus Station of Chelyabinsk. It seems that there is only one flight a day, it starts at 16:00, arrives at 23:00. Every day except Saturday.

Also in the summer there are flights Magnitogorsk-Arkaim-Breda. It leaves the Magnitogorsk bus station at 14.30 (on Sundays at 21.00). From the railway station Breda leaves at 7.00 (Sunday 16.40).

On Fridays, there is a private bus from Yekaterinburg (from the circus) at 20.00. Passing through the Chelyabinsk railway station at 23.30, it still picks up passengers traveling to Arkaim.

Arkaim on the map

Arkaim reserve
An ancient city considered by many to be a place of power. Hence the large flow of visitors to this backwater.

An ancient city considered by many to be a place of power. Hence the large flow of visitors to this backwater.

P.S. And no matter what they say, there is something special there or not, it is always great to be in nature after a big noisy city. Especially spending the night in a tent in the wild. the beauty!