To be honest, what I love the most is my first impressions of the country. You fly in anticipation of what she is, the first glance from the bus / taxi to the city, the first trip to the store, the first conversation with a local resident. And somehow these days all the sensations are most acutely experienced, because I am ready for them, open to meet them and expect something so unusual, and sometimes even fabulous. You may be familiar with this..

But only then, after a while, everything becomes quite commonplace and it is much more difficult to isolate something interesting (for example, for an article on a blog). And only then, having lived in the country, you can write «second» impressions, deeper, without a touch of superficiality. Moreover, if you like the country, then you arrive there for the 10th time with interest..

I cheated a little by naming the post «the first» impressions. All the same in Poland we were, but it was only one day by car, so it cannot be considered good. We hardly got out of the car ...

We had a direct flight, specially bought such tickets in order to spend less time on the plane. And decided to fly in the evening, after a nap. Since Sheremetyevo is far from us, we went to the airport in the first half of the day so that Egor could sleep in the room of his mother and child, and then immediately on the plane. By the way, the tickets, as usual, I monitored for Aviaseels and Skyscanner, eventually buying through Aviaseels, it was 200r cheaper, heh 🙂

The mother and child room is a useful thing, now we will use it all the time. She has only one drawback - there can be one adult for one child, that is, I had to take a walk. They also offered us special escorts, as a result of which we got to the gate in 15 minutes. 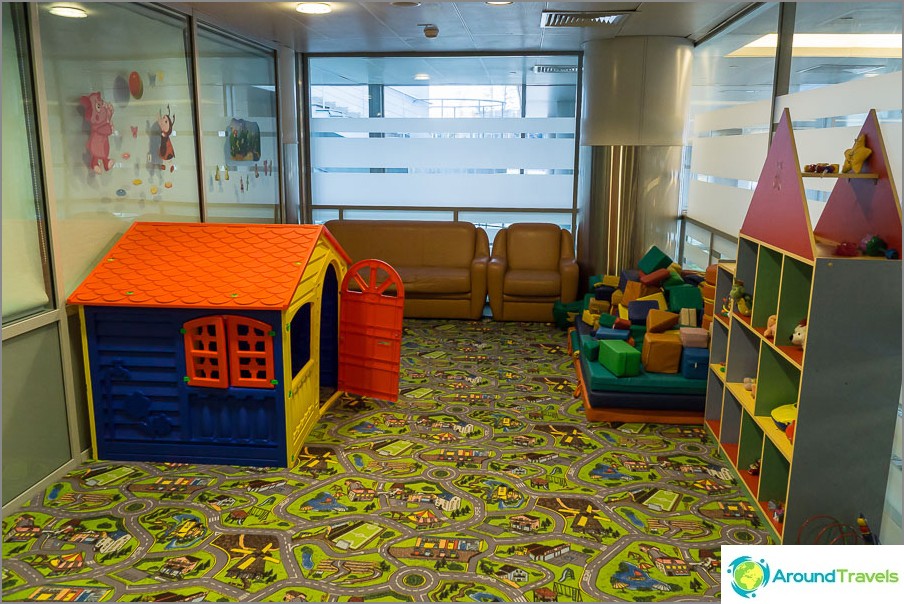 Playroom in the mother and child room at Sheremetyevo 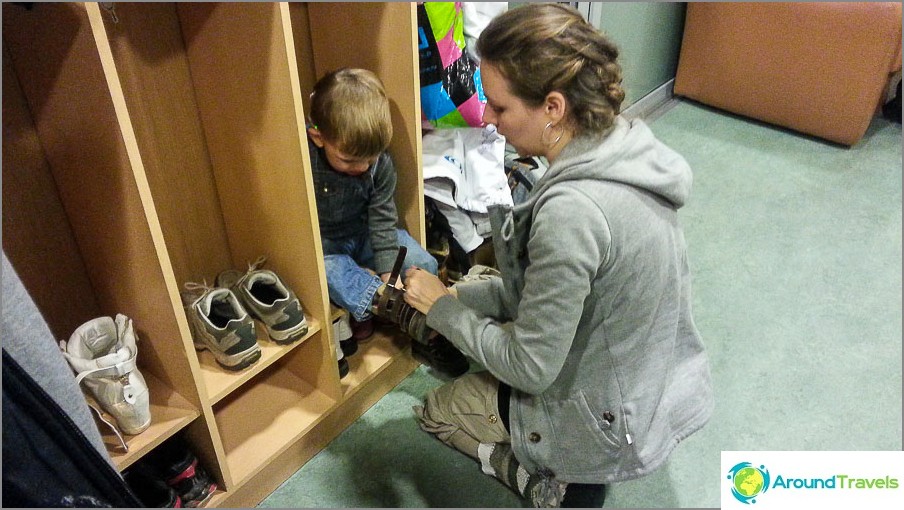 Great locker for dressing up shoes for bouncy boys

Egor behaved surprisingly well on the plane, we still remember our flight to Bangkok and a withdrawal after it for several days. Soon to fly to China, again for a long time on the plane it will turn out. 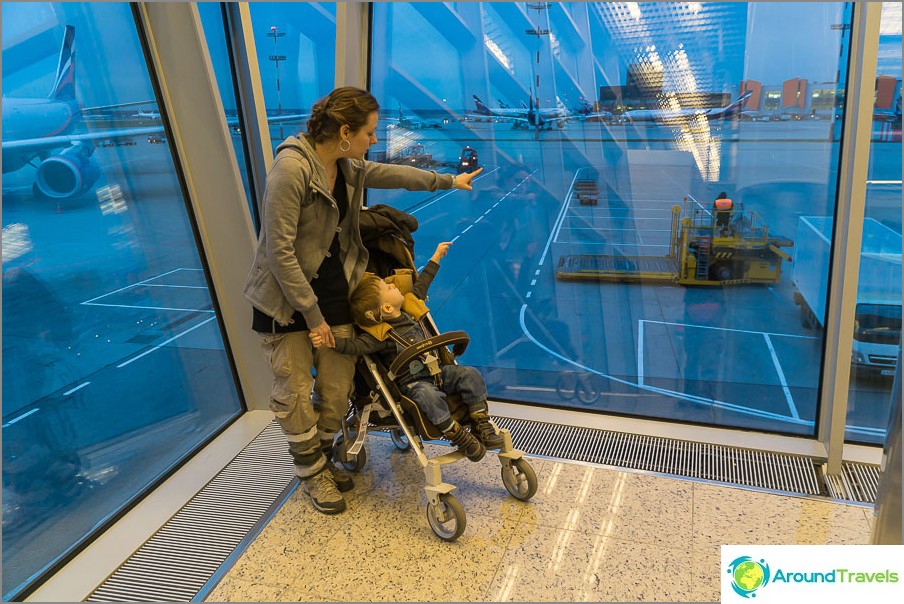 We are waiting for our plane 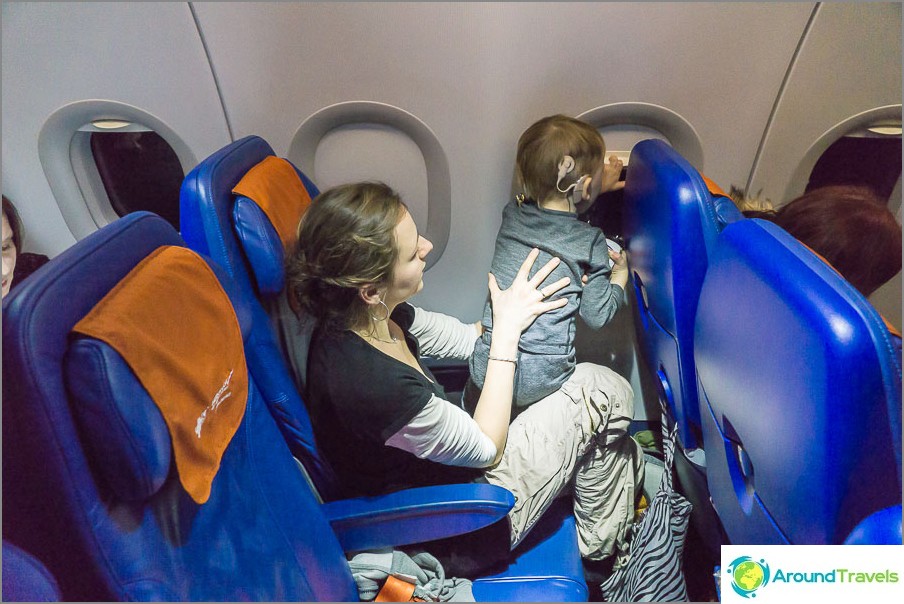 Egor was calm for himself, he did not run further than our three chairs 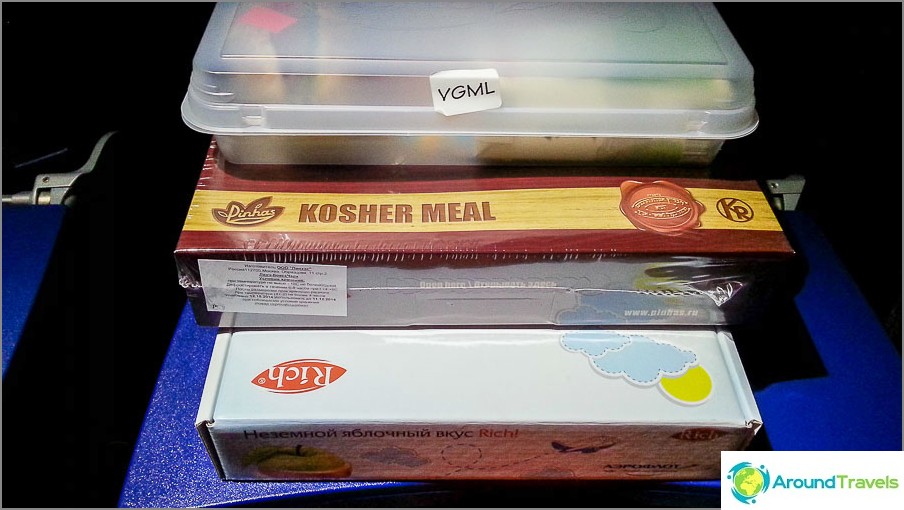 I always order some non-standard food on the plane 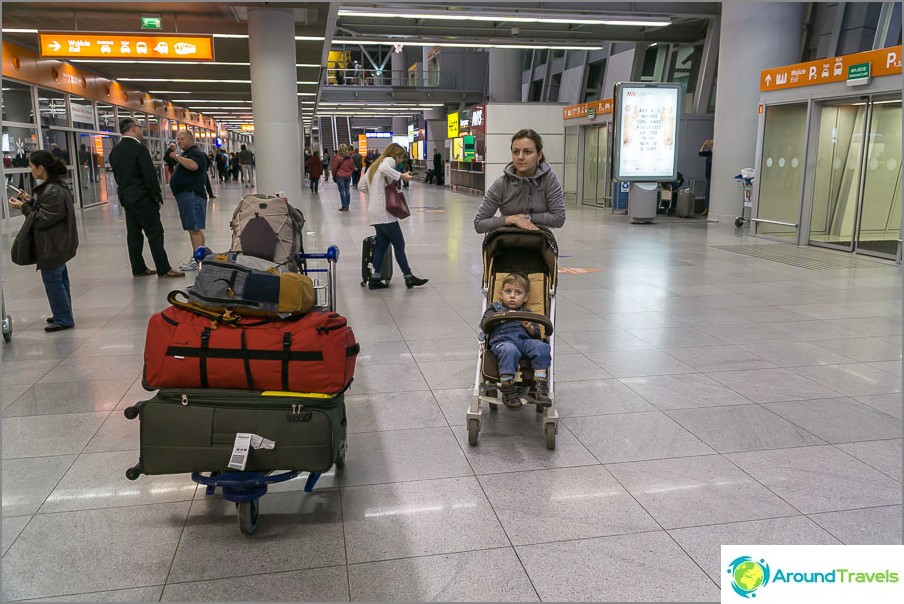 Warsaw airport and our junk

Before the trip, I was told that there was nothing to do in Warsaw, because during the war the city was razed to the ground and recently rebuilt. Although some developing countries, this did not prevent the construction of a picket fence of skyscrapers (Singapore, Kuala Lumpur) and create a modern metropolis in an even shorter time. So, really, the architecture in Warsaw is dull and gray, right in some places really concrete barracks without frills. 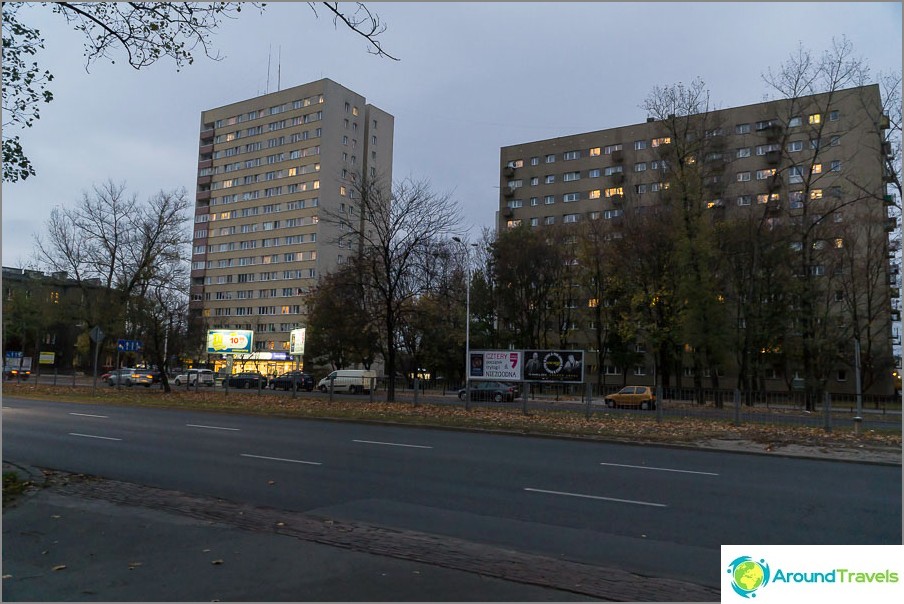 Well, it's not beautiful!

But you know what we first exclaimed when we came out Taxi near our apartment? Air! It is somehow surprisingly fresh and clean here. After gas-polluted Moscow, we both paid attention to this. But perhaps our noses deceived us, because I did not look for or compare data on air pollution..

The next day, in the light of day, they once again looked at the dull architecture, yet it is not very good. Also, the impression was spoiled by rubbish on the street, broken tiles and asphalt in places, some kind of not quite Europe. This is not a new residential area in Moscow ... On the other hand, you understand that it is not Russia either. Pensioners on the streets are similar to ours, only they are more decently dressed, in the park and on the streets there is a romantic foliage blown by the wind, in every house there are balconies and window sills in flowers, sidewalks are paved with tiles, in some places you come across very well-groomed corners with flower beds and some thuja. It is difficult to explain, but here everything is different. And in general a collective term «Europe» is not correct, because such different countries in the European Union / Schengen have gathered. 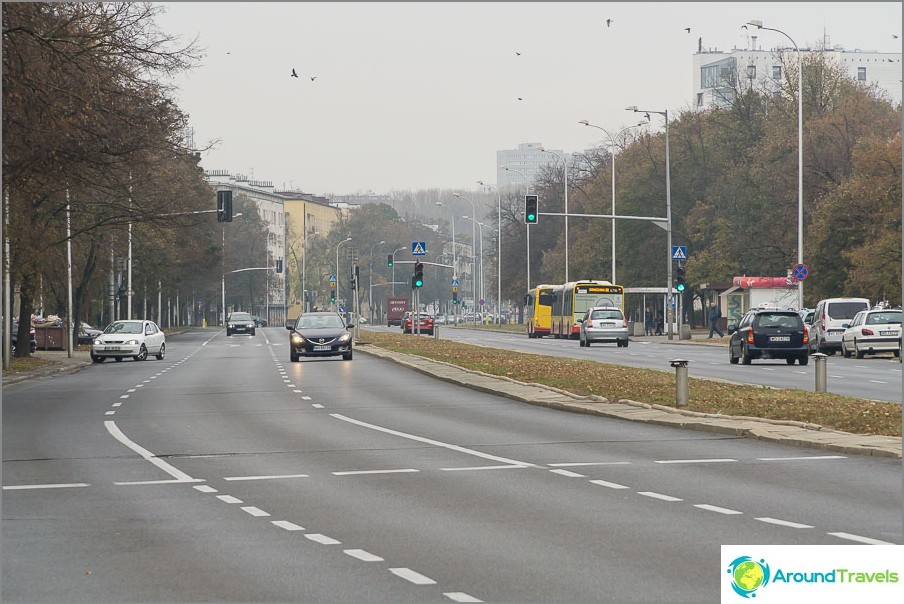 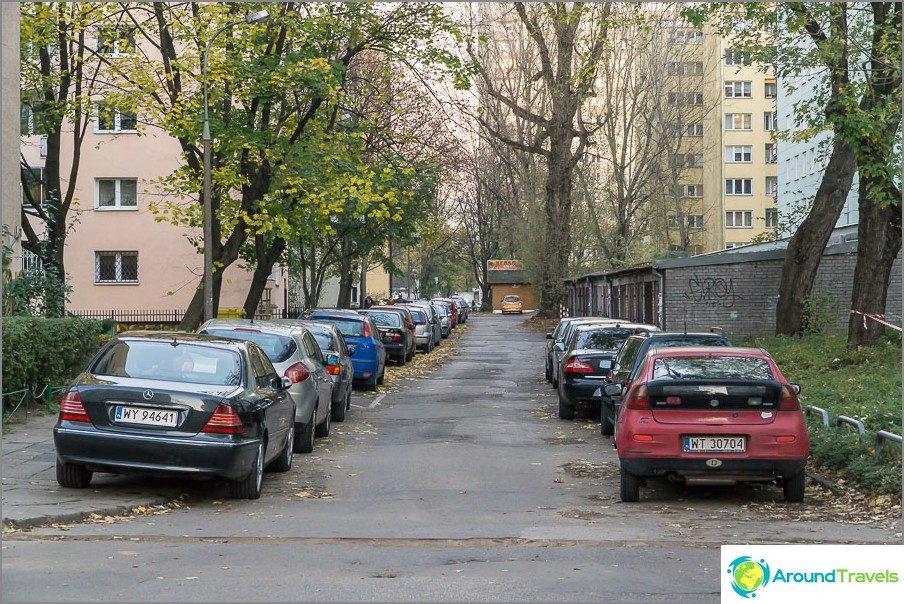 Warsaw courtyards in our area 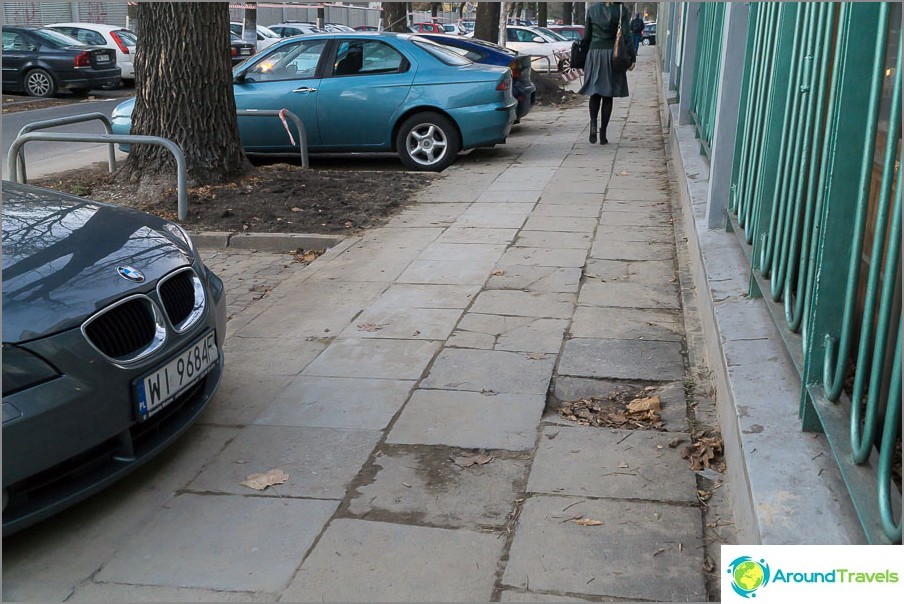 The street we walk on every day 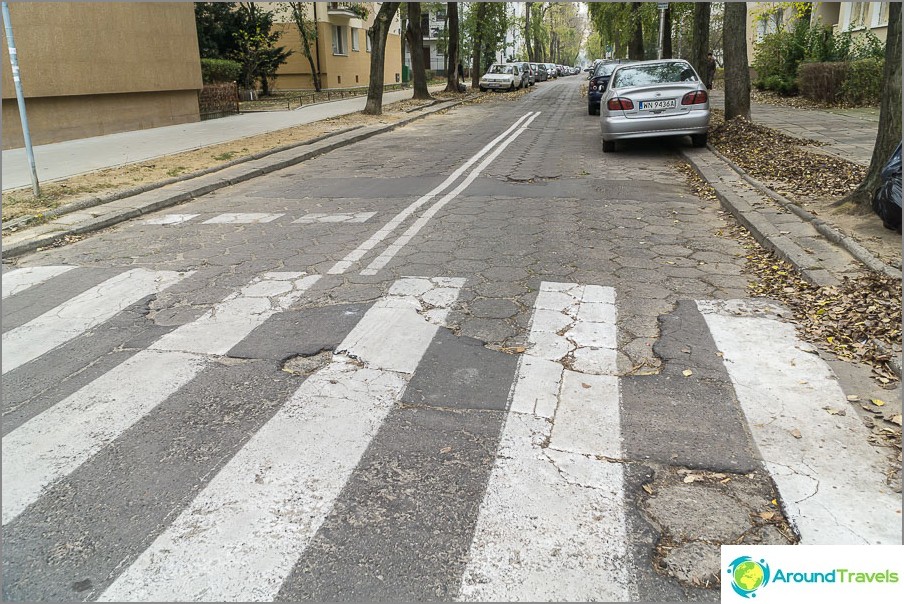 There is also asphalt in Warsaw 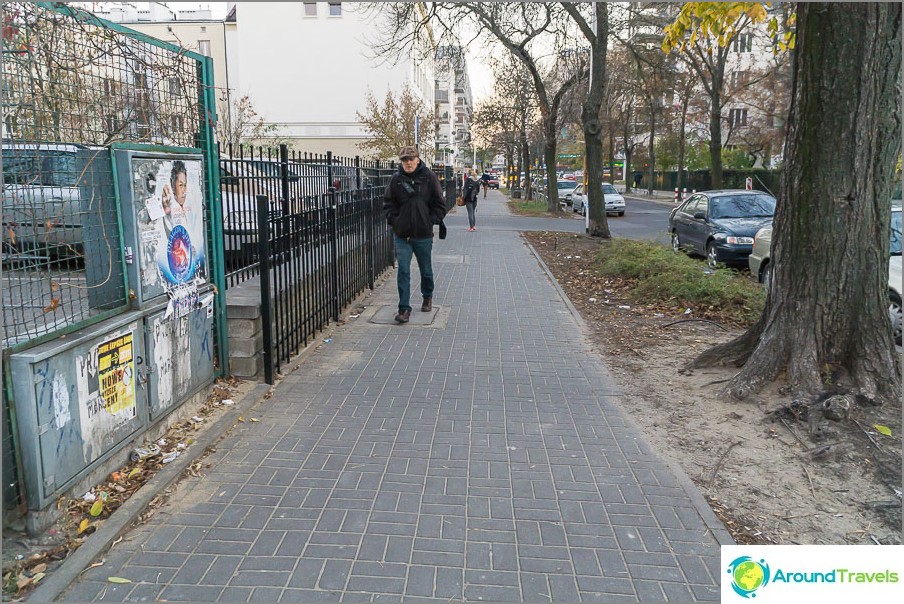 Trash on lawns and unkempt walls 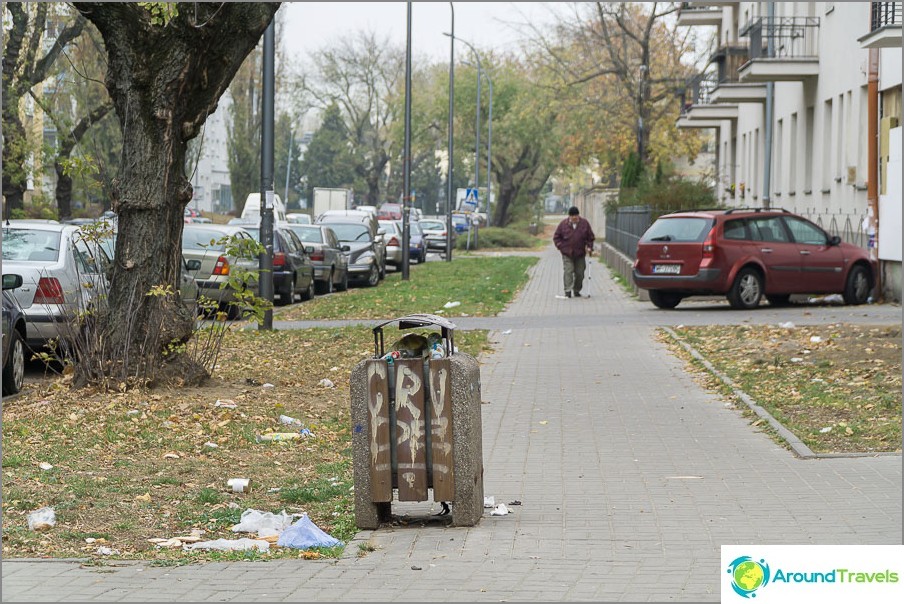 Garbage on the streets of Warsaw 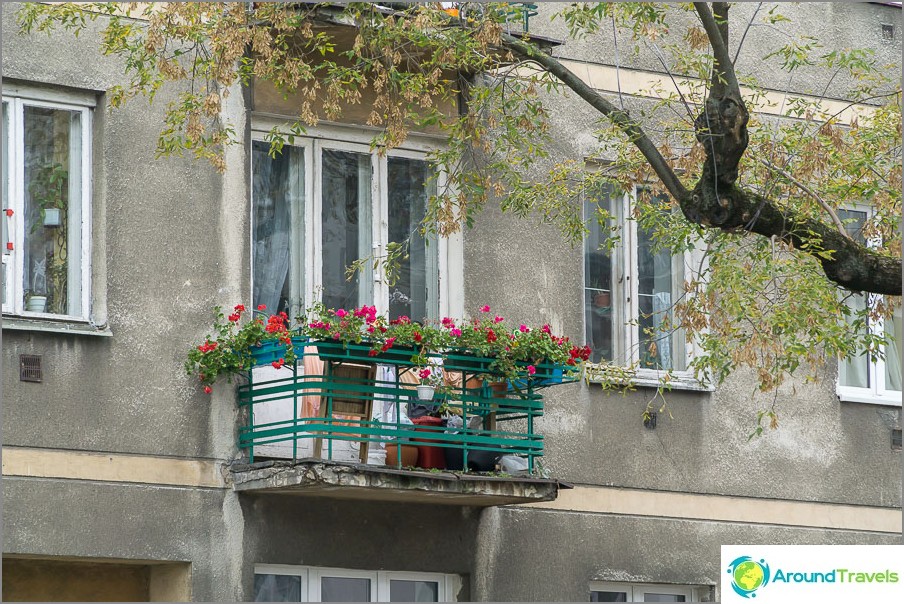 But everywhere there are flowers on balconies and window sills 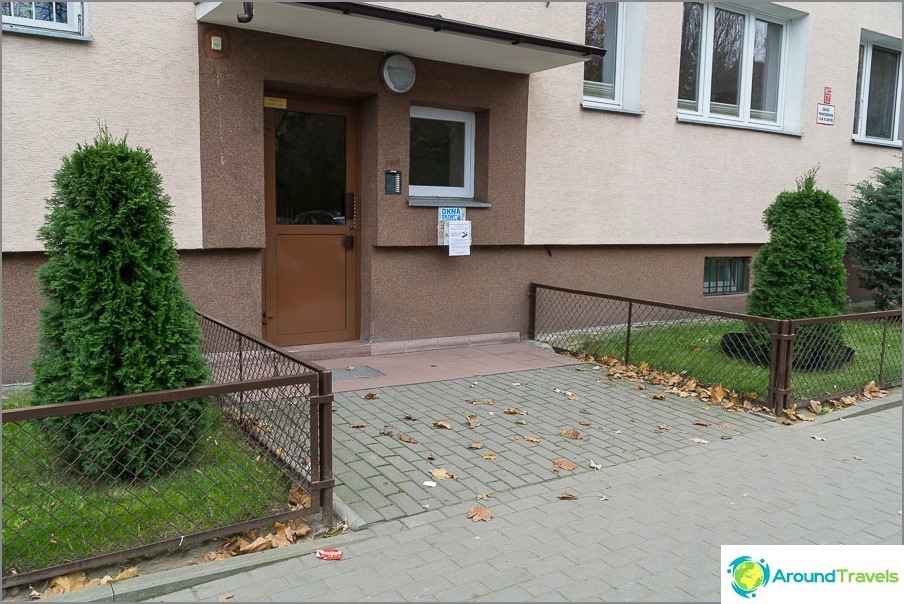 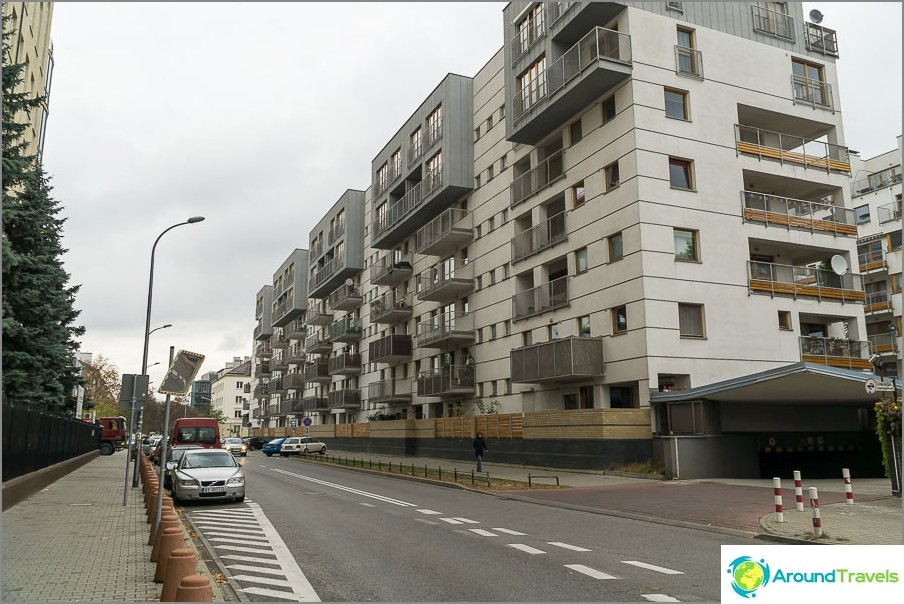 Our apartment turned out to be better than our expectations, large and spacious, with a full kitchen and normal sleeping places. But I already wrote about the apartment, I will not repeat myself.

After settling into the apartment, already at night, I went to Tesco. It was surprising to meet the familiar Thai name here, the soul felt already warm. And when I went inside, I found Ashan's prices in a local supermarket. Sour cream (400 ml) and milk (1l) 30 rubles each, brie cheese (200gr) 50 rubles, regular cheese 200 rubles / kg, water 5l 20 rubles, a pack of frozen vegetables 20 rubles (more about prices). In our neighboring supermarket in Moscow, everything is 2 times more expensive. And you know, I like the quality of the food much more, the sour cream is very tasty, and the tomatoes are more or less normal (from the supermarket). I taste tomatoes everywhere, my favorite vegetable (fruit?). Here and cherry are normal, as we once had ... 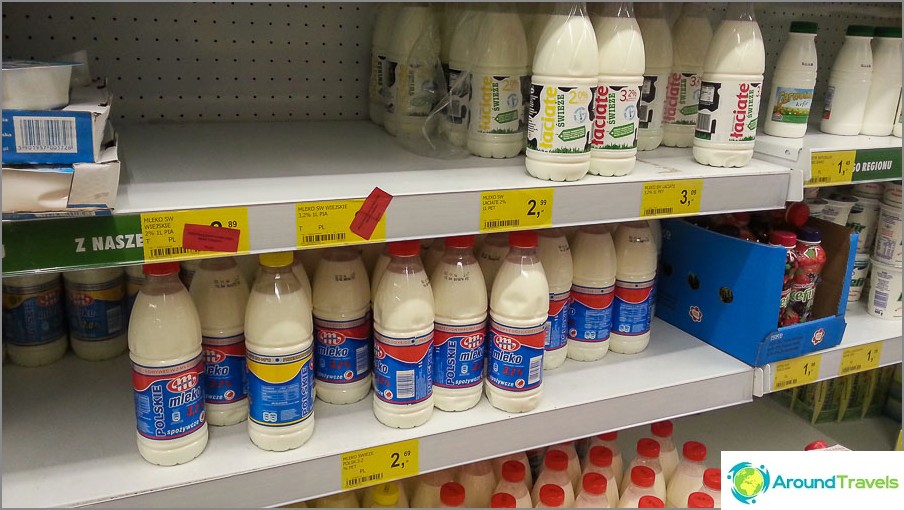 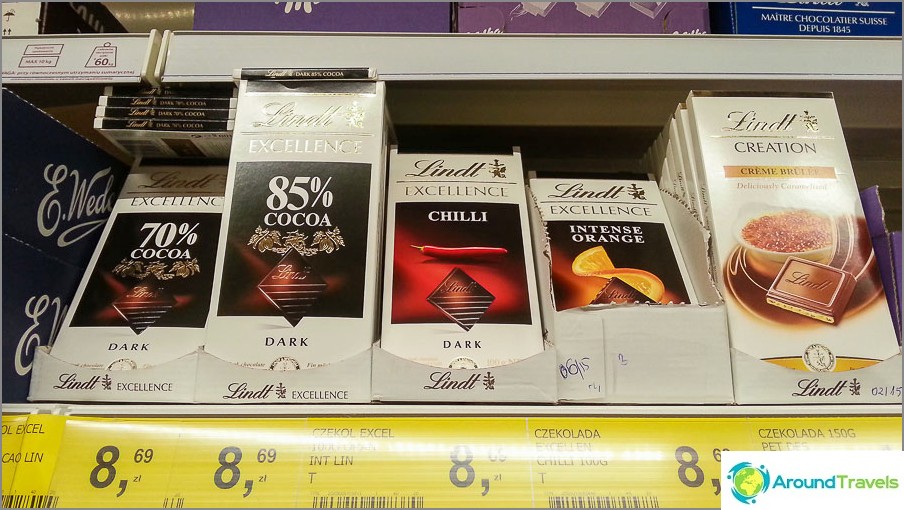 I was looking for a chocolate bar with pepper in Tae for a long time, but I found it in the Polish Tesco 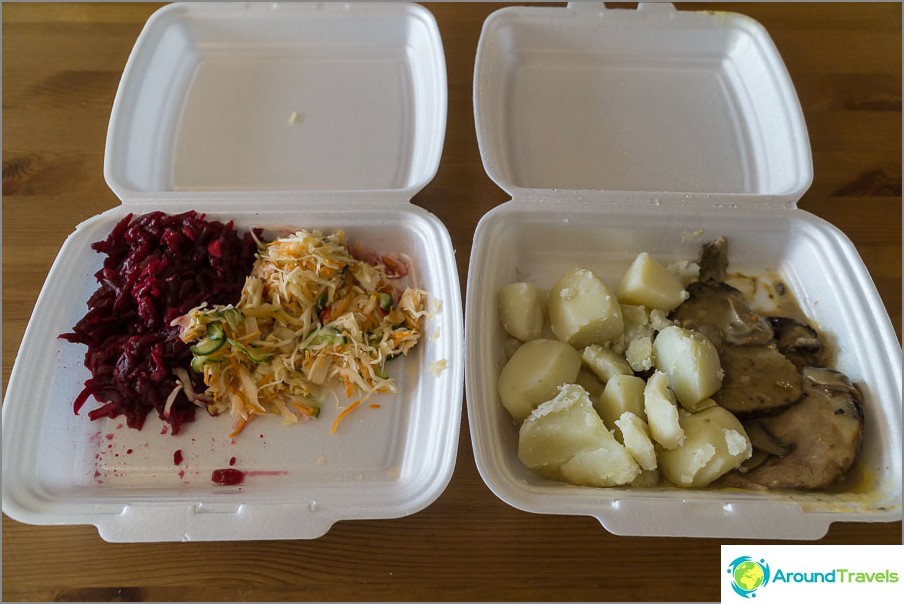 Food in the canteen costs 180 rubles per serving

It's nice that almost everywhere, including city ​​buses you can pay with a bank card, saving on commissions. I even paid for a taxi by card. Thailand is resting in this regard, there only supermarkets accept cards. But the euro exchange rate is not happy, since the income is in rubles, the price in local currency remains the same, but for us everything is slowly becoming more expensive..

We accidentally rode the bus with hares, we just didn't have time to buy a ticket 🙂 The driver did not speak English, and the machine inside the bus turned out to be hefty complicated. A little later we figured it out, but we didn’t have time for a couple of minutes (we were driving only 1 stop). From the outside, it probably looked funny - such people burst into the bus, rushed to the machine, poked cards at it, tried to shove money, made some noise and got out of the bus. By the way, the locals didn't rush to help. A few days later, of course, they figured it out and I wrote a post about transport in Warsaw. 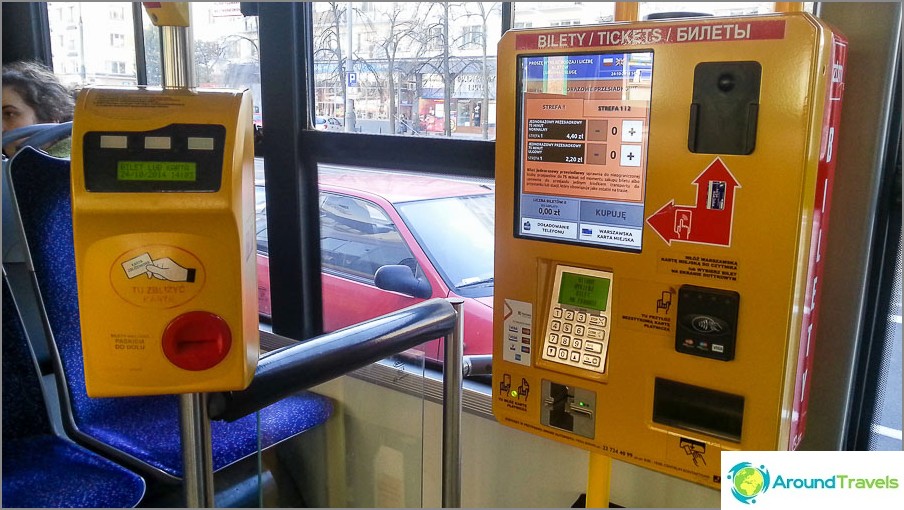 Try to figure it out in 3 minutes

On the first day we were very pleased with Olinek (my detailed reference book on Olinek). This is the center where we came to study with Yegor, and for the sake of which this whole trip was started. There people really work and are looking for an approach to the child! We are delighted! Maybe this is so noticeable in contrast after Russia, but damn it, how it got that Russian teachers are lazy, their favorite phrase is «Mama calm the child down, I can't deal with him». I just want to answer them: why do we come to you at all, look for an approach, this is your job in the end! There would be no problems, they would not come. The last rehabilitation center in the Moscow region in Vatutinki left just such an impression about itself - almost lost time. 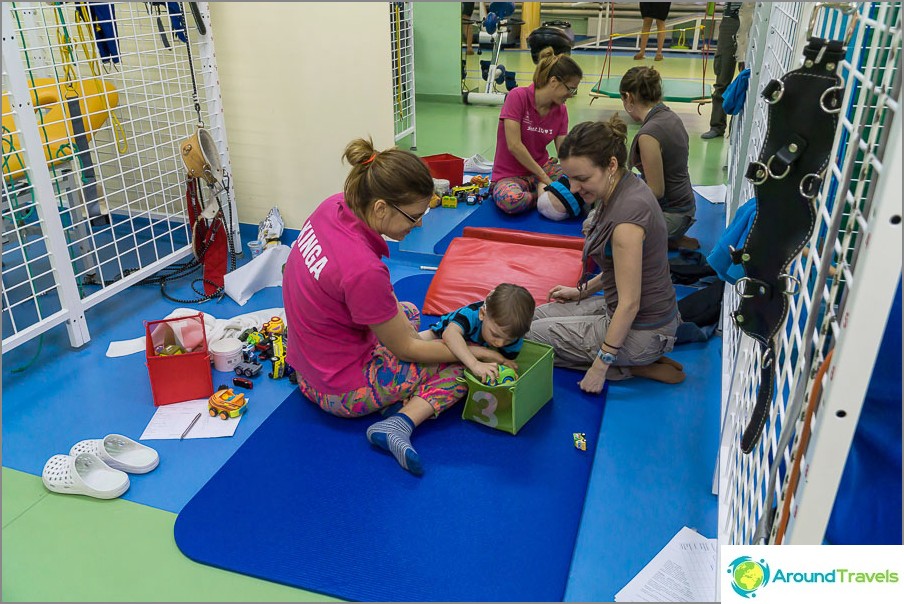 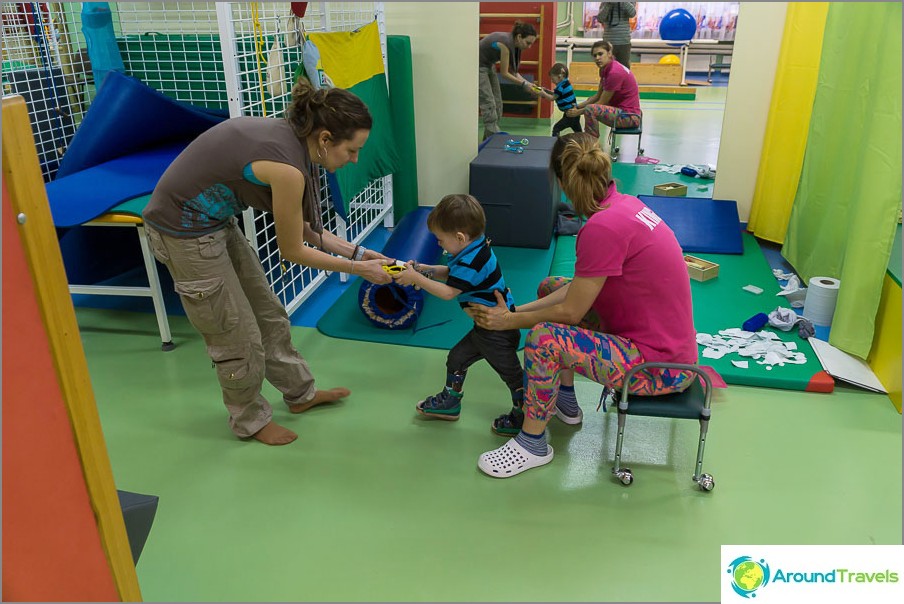 The boy really wants to walk, but he cannot yet 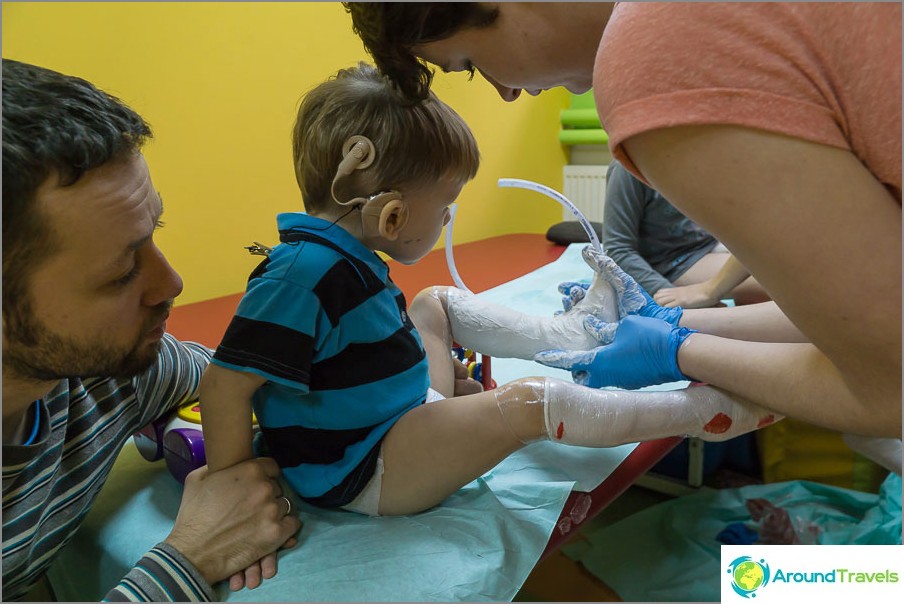 Immediately in Poland, they decided to make orthoses

And yet, I would have ripped off the hands of that Russian official or doctor who drew up the standard for medical institutions in 30 minutes for massage and exercise therapy. They all fell from the oak there, it's ridiculous to God! And then they still take offense that we do not want this «handouts» enjoy. Why do we need such free rehabilitation if there is no sense in it. Yes, and in an amicable way, it is not free at all, the state allocates money for it, which fly into the pipe, it's a shame. In the Polish Olinek, exercise therapy takes 2.5 hours (and then another hand separately for 1 hour), in China there are similar standards, and only Russian children with some kind of fright should have enough 30 minutes a day ...

P.S. In general, we are very pleased that we came here. And now we understand that if it were not for the return tickets, then perhaps they would have stayed here for another month, although the classes are expensive, not in China (there is 2-3 times cheaper). But the rehabilitation itself is good, the products are cheap and tasty, and in general it is pleasant to be in the city.

P.P.S. Here's another thought that arose, perhaps you should be like top bloggers and make posts by type «bad Warsaw» and «good Warsaw»? That is, in one post there are beautiful photos, in the other all trash and drawings on the walls..