Home › New articles › Sukhothai Historical Park - how to get there, what to see, our guesthouse

Sukhothai Historical Park - how to get there, what to see, our guesthouse

As usual, post to help solo travelers wishing to visit Historical Park Sukhothai. Maps of the area, points marked on google maps, of the places where we were, our guesthouse and so on. You can read our impressions of visiting this place in the article Sukhothai - the cradle of Thai civilization and Buddhism. In short, I can say that it is worth going there, especially if you like ancient temples with their energy..

The city of Sukhothai is located in the north of the country, roughly between Bangkok and Chiang Mai. And the Sukhothai Historical Park is located to the west of the city, about 15 km, and is called by the local Old City (Old City). So if you take tuk-tuk or santeo, then this is exactly what you should say. The city itself is not worth seeing, there is nothing interesting there, well, only if you go to the market for fruit. But the historical park is another matter!

To begin with, map Sukhkotai on google for an idea of ​​what will be discussed. It has a bus station, our guesthouse, and temples that we think are worth seeing..

Where can I stay

There are two options for where to stay: next to the city itself and the bus station, or next to the historic park. The second option is more convenient, since you do not need to spend time getting yourself to the historical park, but I don’t know that it’s a little worse with housing and prices, but there are many nice cafes, and the atmosphere is somehow more pleasant.

We chose to live near the bus station at 4T Guesthouse, and rode the bike to the park and also to the songteo (20 baht per person to the old city). Also, there was another Garden House guesthouse close to the main road and next to 7/11, where the cost is about the same.

In this area, I can recommend our guesthouse in Sukhothai, to which we were brought by a tuk tuk from the bus station for 50 baht, and located a 10-minute walk from it, if you go straight (marked on the map with a blue line). It's called 4T Guesthouse, you can book here, and it is better to do it in advance, it is popular, often everything is busy. Price - room with fan 300 baht, air-conditioned room 400 baht.

We found our guesthouse through the booking system, read reviews, chose in advance, very convenient. You can also look at accommodation in Sukhotai on the service RoomGuru.

There is a small pool, cafe, free wifi, and bike rentals for 250 baht per day, or 300 baht per day. Wifi works only in cafes, or in houses that are right next to it, so if you need Internet in your room, then ask next to the cafe. 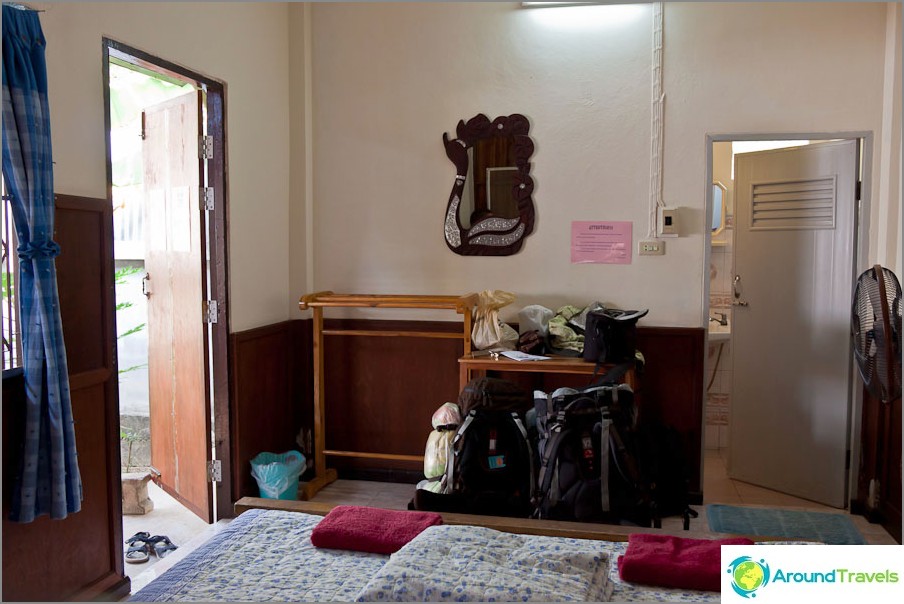 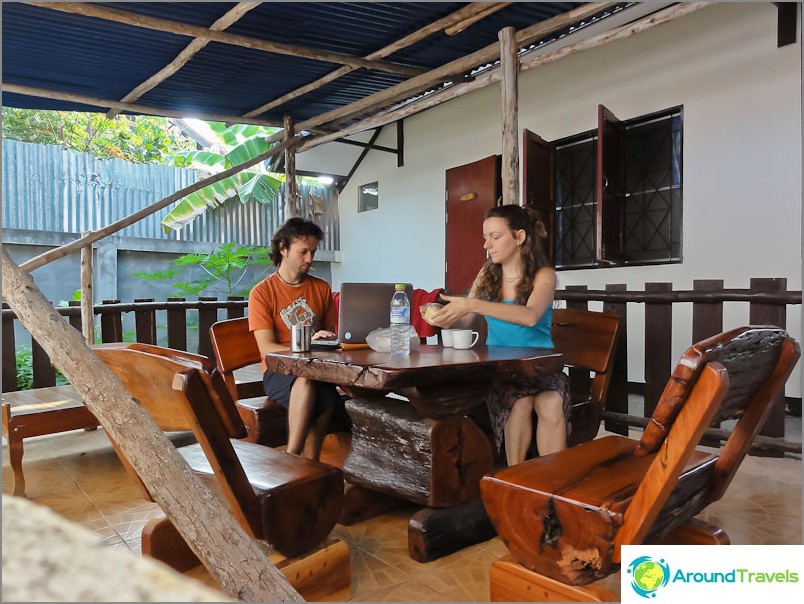 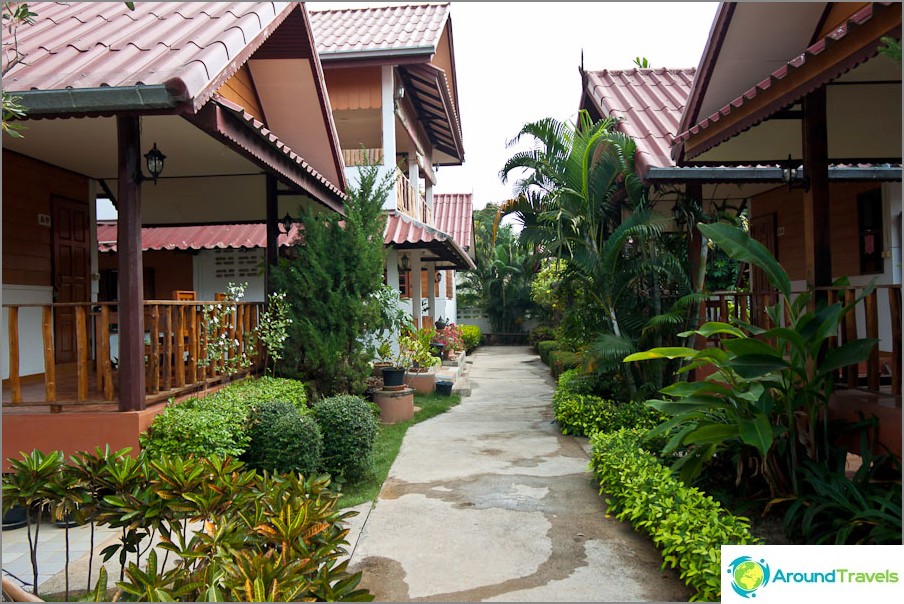 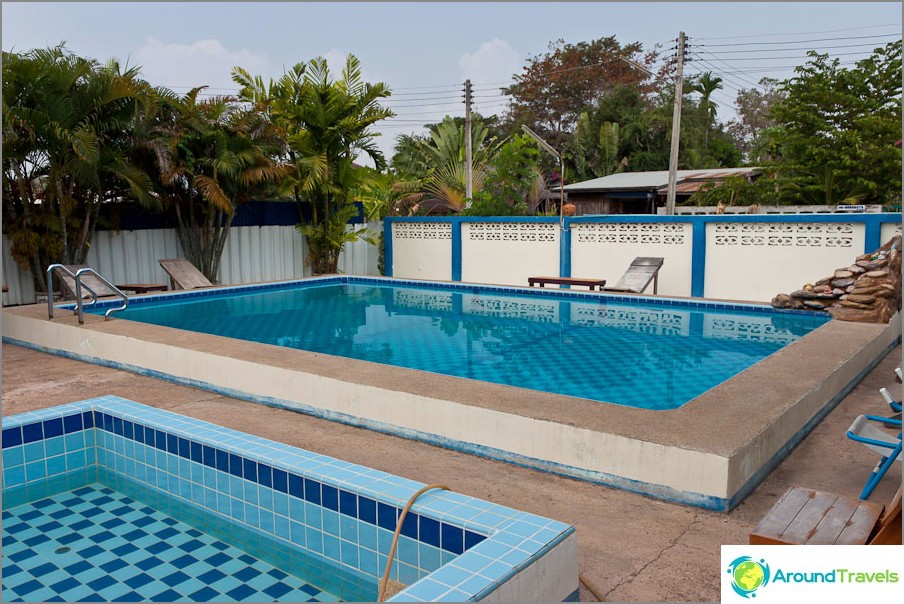 Where is Guest House 4T

How to get to Sukhothai and back

As it turned out, it is very easy to get to Sukhothai. There are two options:

Since Sukhothai is small, buses do not run as often. We traveled from Chiang Mai, on a morning bus (ours was at 8.45, there were only a few buses in the morning), travel time 5 hours, cost 218 baht (218 rubles). 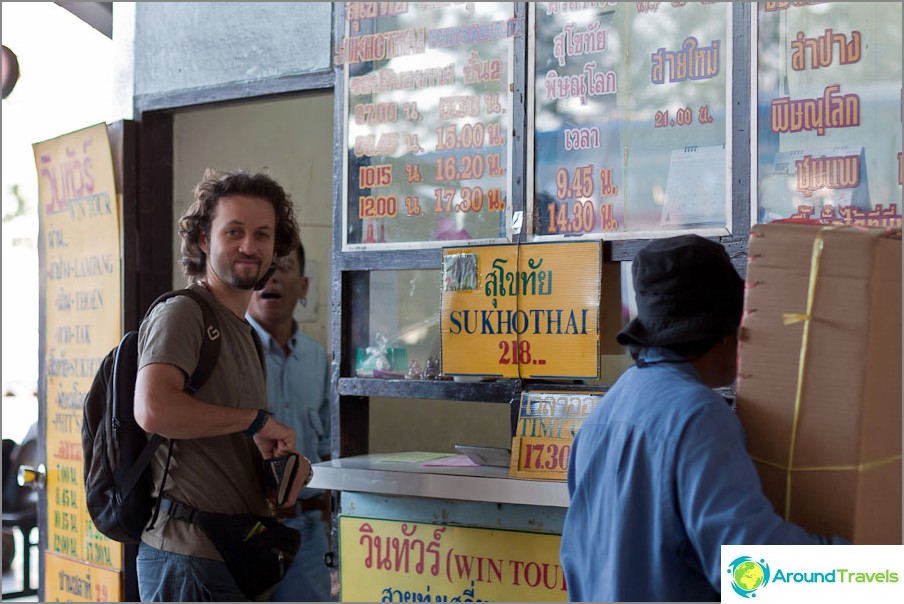 We buy tickets for the Arcade Bus Terminal in Chiang Mai

Phitsanulok is a larger city, and is an hour's drive from Sukhothai, small buses run between these cities every hour. Cost 40bat (40r).

Phitsanulok has a railway station, so you can get from Bangkok or Chiang Mai by train. There are buses here, as it seemed to us in almost all directions, and they run quite often. 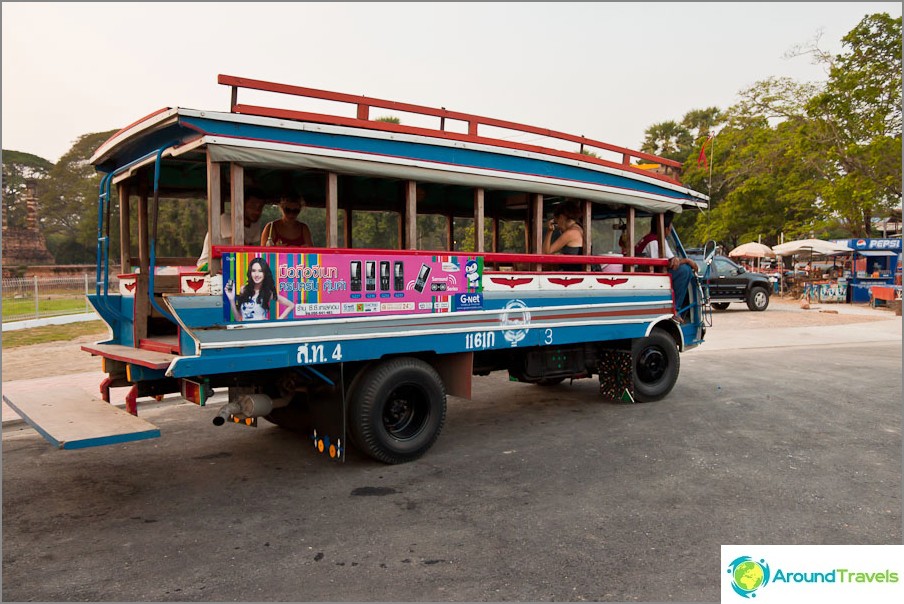 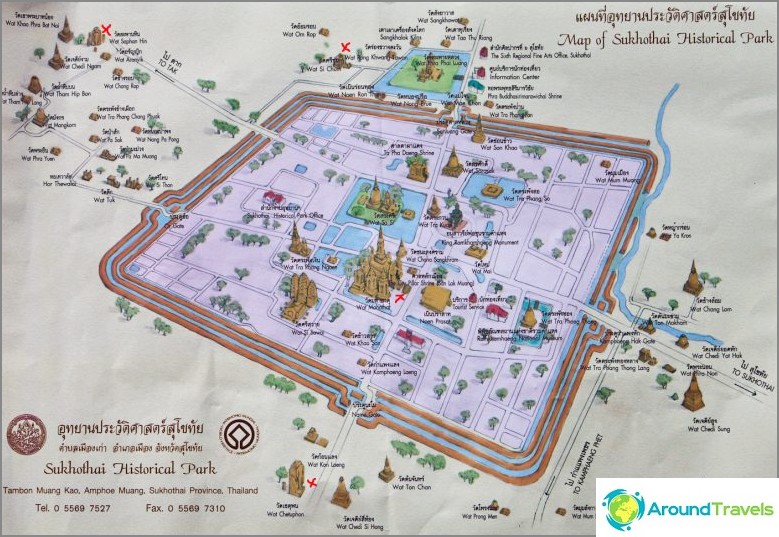 From the point of view of visiting attractions, you can easily fit in one day, quickly run around, take pictures of everything, and go home. However, if you want something more, then you should stay here for at least a couple of days, and spend several hours next to some temples, just resting from the bustle of the world. After all, this historical park is a place of power, for hundreds of years people have rubbed these stones..

The cost of visiting the park

Historical park Sukhothai is divided into three parts: central, northern and western. I have circled them with a red line on the map. Opening hours of the central part from 8 am to 6 pm, north to 17.30, western to 16.30. There is also a southern part, but it is free, and there are literally several temples.

The entrance to each of them costs 100 baht. There is no single ticket. For entrance with a bike another 10 baht, with a motorbike 20 baht. You can take it for free if you get confused. And in the western part, there is generally a booth only on one road, and if you go from the other side, you will not know that you have to pay for it (this happened with us by accident).

Near the entrance to the central part of the Sukhothai Historical Park, there is a bike rental for 30 baht per day (30r). If you are going to visit all parts of the park, then it is worth taking, if only the central one, then it is not necessary, it is not very large. Great, by the way, so-so, walking-city. 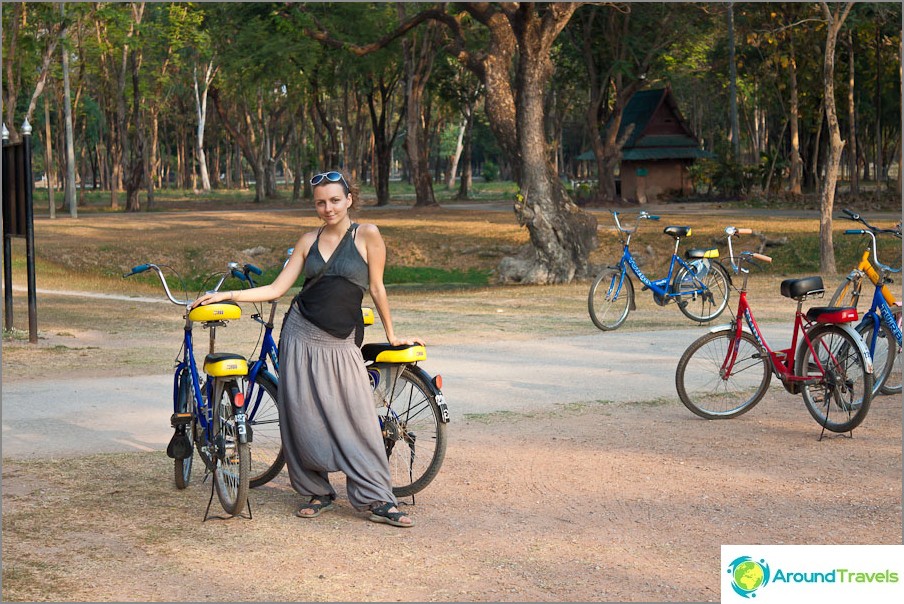 What temples are worth seeing

When you walk for two days in the Sukhothai park, your eyes get blurry, and the temples already seem to be similar to each other. Therefore, we often just hung out for several hours at one of them, in order to just sit and think, enjoy the moment. We did it everywhere, except for the central part, since there are most people in it. Although, it is a nice park with many cozy places to relax..

Most of all, we remember 4 temples: 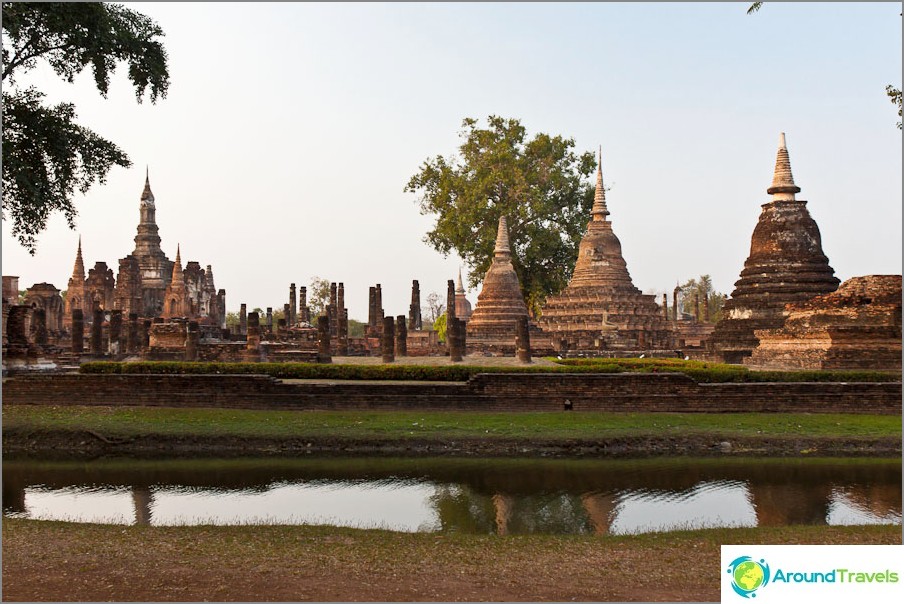 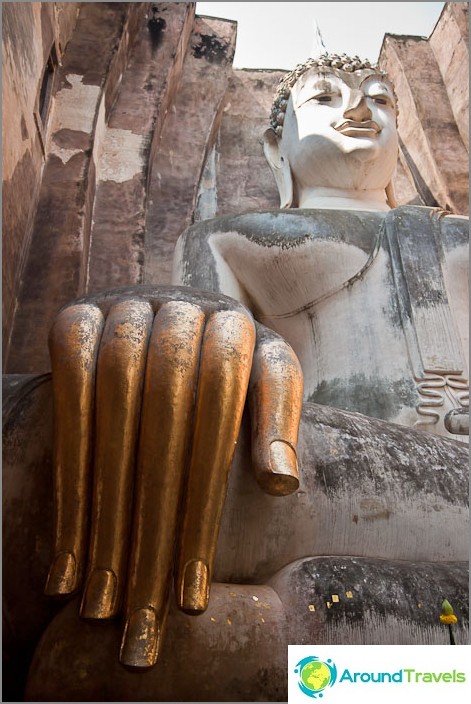 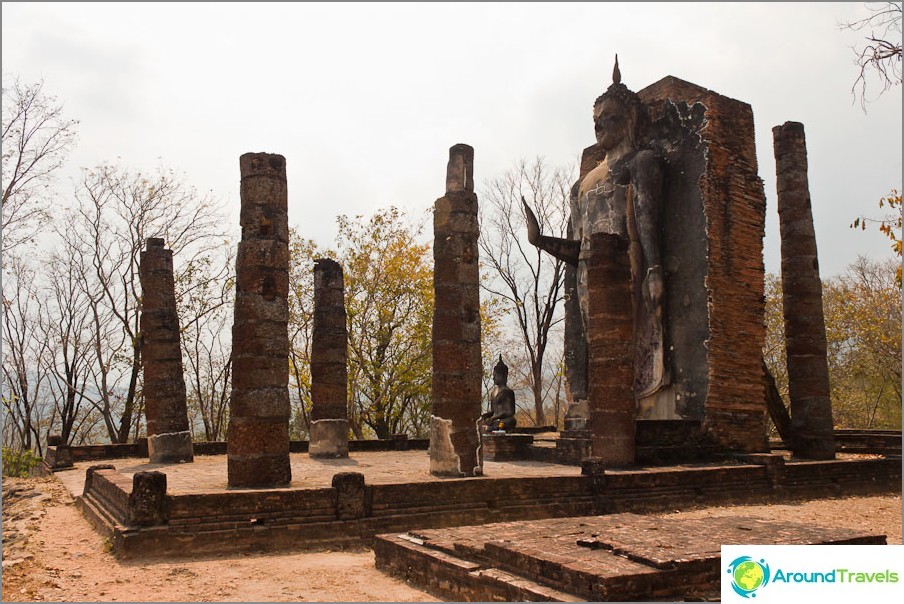 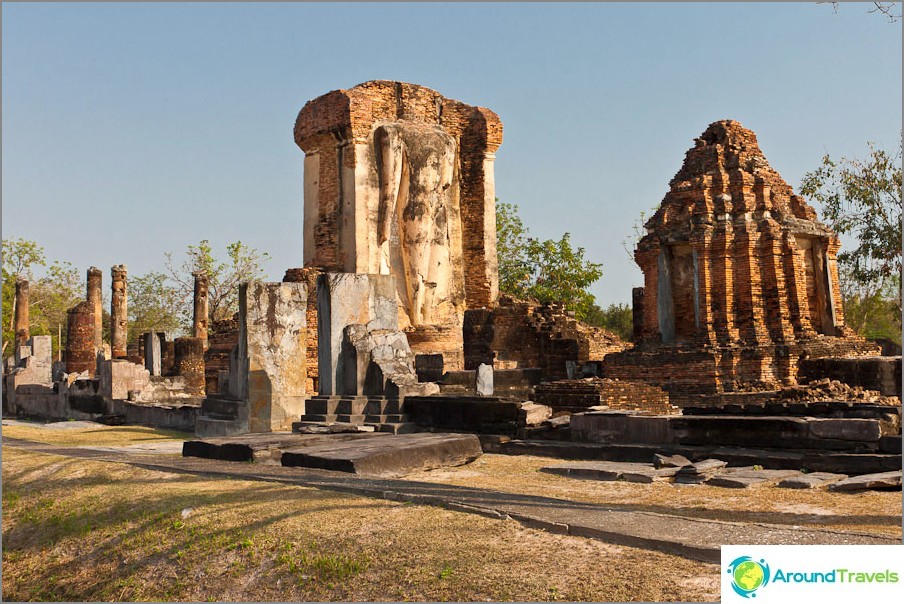 Have a nice trip!