The population of Armenia 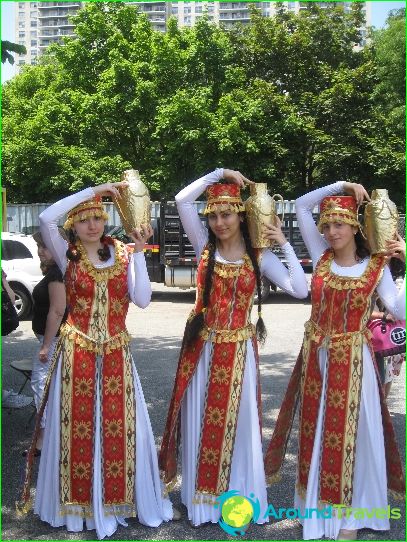 Armenia has a population of over 3 million people.
The Armenian diaspora has been formed as a result ofpersecution, forced displacement, national and religious persecution by foreign invaders (during the First World War, they massacred and deported, but many managed to escape and flee to other countries, resulting in an overseas Armenian communities).
On Earth, living about 12 million Armenians, who inhabit not only Armenia, as Russia, the USA, Middle East, Europe.

On average 1 km2 is home to 101 people, but the highest population density differs Ararat Valley (here focused almost half the population of the country).
The official language is Armenian (he has 2 dialects - East and West).
Major cities: Yerevan, Vanadzor, Gyumri, Abovyan, Vagharshapat.
Armenian residents profess Christianity, Catholicism and Protestantism.

On average, Armenians live to 74 years. But, nevertheless, Armenia is famous for its longevity - that contribute to environmental conditions (salubrious air), the use of the delicious, natural foods and wine.
Residents of Armenia all the more likely to die from cancerdiseases. The reasons for the growth of these diseases is urbanization, pollution, consumption of genetically modified foods, hormonal drugs.

The traditions and customs of the Armenians

Until today, the Armenians managed to preserve such traditions as strong family relationships, lasting marriage, respect for elders, and related mutual neighbor.
Armenians - hospitable people and know about it inall over the world: they are, on the occasion of any joyful event lay the table, not only at home but also at work. If you happen to be present at these feasts, do not refuse to eat and drink, otherwise Armenians will think that you do not want them to be happy.
In general, the Armenians believe that the more often they will set the table, the more happiness they will return.
Of interest are wedding traditions: on the day of the wedding the groom must slaughter the bull (symbol of fertility and procreation). And to witness the couple takes itself a young married couple, whose relationship can serve as an example for them.
To reproduce the young heir to the light, according to tradition, the bride on the wedding day to give to hold the hands of a male baby.
On the Armenian wedding and no one will never be bored - the festival is accompanied by songs, dances, music, shooting into the air.
Armenians - hardworking, savvy, energetic, good-natured and energetic people who are always ready to help.

Bus tours to Scandinavia. The cost of bus tours ...