The railways of Turkmenistan 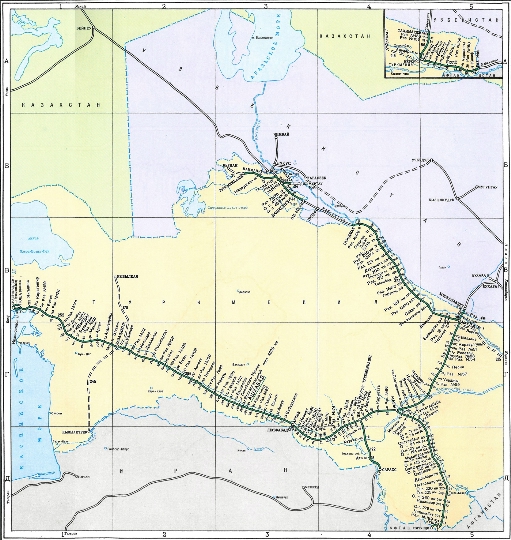 The railway sector is in Turkmenistanstage of modernization and development. It was built in Soviet times and still has a small number of lines. The main road - Turkmenbashi - Turkmenabat (Krasnovodsk - Ashgabat - Chardzhou). The railways of Turkmenistan gradually increase their length. Today it is more than 2330 km. Significant route is Mary - Kushka and Turkmenabat - Lebap.

Rail transport is managed bystate-owned company. The state occupies a prime position on the geopolitical map of the world. Turkmenistan - a transit area in which the transport sector plays an important role. Especially important transit routes. The country is trying to develop all types of transport:. Rail, road, sea and other Turkmen railways are mainly through the sand zone. Major stations are the following items: Ashgabat, Altyn Sahra, Gazachak, Atamyrat etc. For Turkmenistan, which are sent to Moscow, the problematic section of the road is Talimarjan - Kelif through which trains move in transit.. Here it is necessary to issue a transit visa Turkmenistan.

Railway actively expanding the scope of the country: there are new stations, updated rolling stock, built a transnational highway. line was built along the Amu Darya river through the desert. Construction of railways being in compliance with the new technologies and international standards. Popular international trains for passengers in the country not yet. Trains ply only within the state. The government extended a line connecting Turkmenistan and Kazakhstan, which connects the country with Russia. The most important part of the way Tejen - Sarahs - Mashhad stretches for 300 km, of which 132 kilometers are in Turkmenistan. This road directly links Russia and the countries of Central Asia to the ports of the Persian Gulf.

Turkmen railway ismixing tradition and modern trends of the USSR. Railway stations of the country are made in the traditional oriental style, but modernized in line with new trends. Turkmenistan used the train started in China. A special feature is the presence of the compartment wagon with 6 shelves. The trains are equipped with beds and air conditioning. Tickets for Compartment place to sleep is not high, so they are always in great demand. Driving directions from Turkmenabat to Ashgabat can be 7 manats (about 70 rubles).

Holidays in the Maldives in December: the prices and ...

The streets of Krakow - photo, name. List of well-known ...