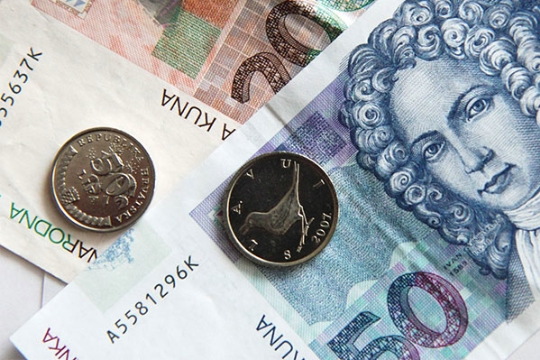 The Republic of Croatia is a recentlymember of the European Union. Despite this, the country is using its own currency. Many tourists before the first journey here ask the question: What is the currency in Croatia? The base currency is the Croatian Kuna. This currency was used in the period from 1941 to 1945. and to this day it is used since 1994.

What currency to take to Croatia

Obviously, the best option would be the euro. At least because the country enters the EU. In addition to exchange euros for the kuna in Croatia is much easier than, say, dollars or rubles. When exchanging euros for the kuna did not need a passport and a number of bills not rewrite - it saves time.
Import of currency in Croatia has no restrictions - itIt refers to foreign currency. If you are planning to bring in Coon country, there are restrictions - are allowed to import up to 2,000 kuna, while the nominal value of bills should not exceed 500 kuna.

Exchange currency in Croatia does not take muchLabour, however, need to reflect on the place of exchange. Since different exchangers offer different conditions, such as in hotels would be the most disadvantageous exchange rate. It is best to contact the specialized exchange offices. It is also worth paying attention to the Commission in the commission of the operation, as a rule, it is 1.5-3%.
It is said that in Croatia there is a separationSavings banks. Russian Bank in 2013 bought Austrian Volksbank International. Today there are more than 30 branches of the Savings Bank, as well as many ATMs.
Note: when leaving the country is best to exchange the local currency, for example, the euro. In Russia, the kuna exchange is problematic.

In Croatia, a large number of services can bepay by credit card. Usually cards are accepted supermarkets, restaurants, gas stations, etc. In addition, you can withdraw money in Croatia via ATMs.

Rest in the Dominican Republic in August: prices and ...