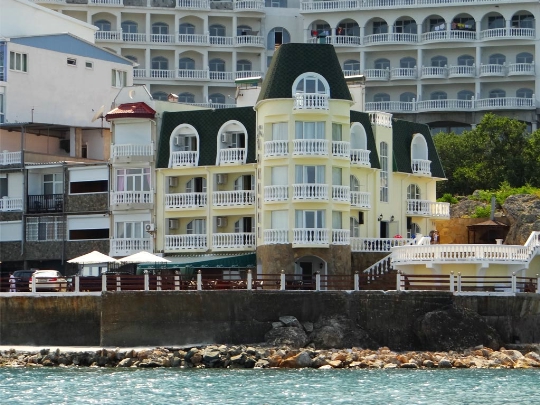 In Soviet times, the Crimea was called the All-Unionhealth resort for a large number of resorts, hotels and other institutions involved in rehabilitation and treatment. And now this sunny peninsula is an inviting place for a summer pastime, especially since the cost of living in the Crimea is low compared with many European countries.

Going on vacation in the Crimea, it should be noted that the rate will depend on many factors, the most important of which - the timing of the holiday, the place, the level of comfort.

The most expensive hotel for tourists and willYalta pensions, especially those located in the city center. One room "Suite" category will be in June and July, about 1,800 Russian rubles per person per day, "Standard" - 1400. By September, there is a price reduction. In Alushta same room, with no fine species, will cost 1500 rubles, with an improved layout - 2500 rubles, two-room - 2700rubley.

In Bakhchisarai private pensions prompted aTravelers from 300 to 2500 rubles, depending on the number of tourists and overnight stay. The most reasonable prices offered in the town of Solnechnogorsk - from 250 rubles per day, but should be prepared for some inconveniences.

Today Crimea in front of changing, evolvinginfrastructure on the coast, increasing the number of hotels and inns, and designed for different levels of income, new excursion routes.

Of the benefits of recreation in the Crimea for the Russians - not required to have a visa, a single linguistic space, one currency. Among the negative aspects - difficulties can arise with public transport.

The length of the coastal areas suitablefor acquiring a beautiful tan in the Crimea is more than 500 kilometers. That is why the locals welcome guests, because they know that the beaches, the sea and the sun's heat will be enough for everyone.

The second nice thing - the beaches in the Crimea at alltastes: sandy; pebble; sandy and pebble; gravel and pebble. Fans of gentle sand need to buy tickets to Feodosiya, there is also a gentle slope and the seabed. The same sea in Koktebel, and here on the coast - a pebble. In Yalta and Gurzuf, on the contrary, the entrance into the sea is very steep, and the beach of gravel and pebbles. Foros surprise snorkellers beautiful scenery Neptune's kingdom, a variety of rock formations and caves. Of these, part of the mountain landscape is visible to travelers, and another - safely hidden in the depths of the sea.

It offers guests a solid hotel infrastructure. Many hotels and mini-hotels offer only accommodation and meals. There are various health centers, enabling both recreational correct health and strengthen the immune system.

With power and no problems. Some tourists prefer the "all inclusive" system is appropriate hotels and looking for food no longer thinks. Other book hotels with breakfast included, and prefer dining in restaurants or cafes.

The total cost of leisure in the Crimea consists ofmany components, including housing prices, which varies greatly. Every tourist who is going to spend part of the holidays on the peninsula comes to choosing a hotel from its own financial capacity and, as a rule, is a suitable alternative.

Holidays in Israel with children - Photo ...

Activities in Macedonia with children - Photo ...