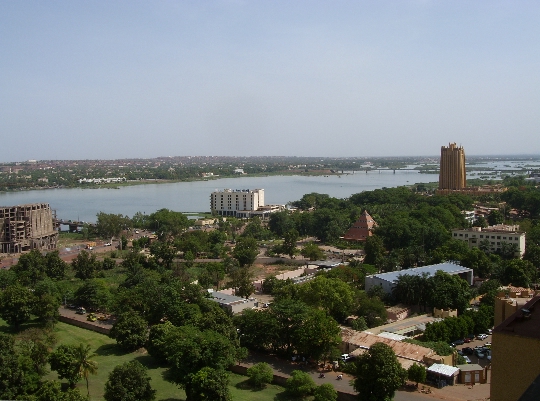 Few African cities can boastthe number of inhabitants, exceeded one million. But not only the capital of Mali, Bamako, a beautiful city that will soon celebrate the birth of two million inhabitants. This metropolis has a very convenient location because near the Niger flows. Accordingly, there is moisture, hills and forests, which provided the first settlers of the building material.

Etymology The origin of the name of the capital of MaliIt is not certain. Many townspeople told a beautiful legend about the first person that appears in these places. Hunter was called Bamba, he founded a settlement named after him.

The second legend associates the name with the Bamakothe word "of the BAM," which at one of the local languages ​​does not mean that other, as "crocodile". A name is translated respectively as "crocodile river". These menacing animals and placed on the main official symbol of the state.

Archaeologists claim that the first inhabitants werein present-day Bamako early as the Paleolithic era, they were nomadic tribes. The settlement also was founded only in the XVII century, as people appreciated the good location - the presence of forests for construction of dwelling houses and water for irrigation of fields and gardens.

Most of the residents engaged in agriculturefarming, growing maize or millet, also common were fishing, tanning tissue. This case involved mainly sarrokoly - black population. The second largest group of residents of urban neighborhoods had Moorish roots and mainly engaged in the slave trade.

The capital of Mali is still very picturesque town,Here live representatives of different nationalities and African peoples who worship different religions. It is also called the crossroads of West Africa.

The city has a variety of religious buildings,for tourists the most interesting is the Cathedral Mosque Bamako. It is built in the center of Mali earlier this location also housed a mosque, built in the era of colonialism. Construction of a new iconic building sponsored by the Saudi authorities, which is why the style of the mosque more Saudi than South African. Her beautiful minarets can be seen from almost anywhere in the city, some days access to the mosque is allowed for tourists.