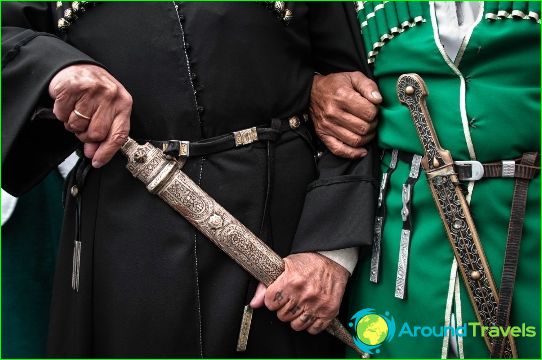 Since ancient times, the culture of Abkhazia has carried the originality and uniqueness of its people, which for centuries have carefully preserved their customs and national traditions. The inhabitants of this country have at the heart of everything a kind of code of honor, which is called "Apsuara". According to this code, Abkhazians have a special form of manifestation of national identity. In other words, "Apsuara" is a collection of folk knowledge, values ​​and rules, customs and principles of the indigenous people of Abkhazia.

Abkhazians know how and love to sing. Music is one of the main components of their life, and therefore folk songs can be used to study the history and culture of Abkhazia. The combination of melody and recitative forms the basis of folk singing, and polyphony is an important distinctive element of it..
Musical instruments on which the inhabitants of Abkhazia accompany singers and dancers have come to our time from time immemorial. They are wind and plucked, strings and percussion. The most famous and popular: the corner harp, a single-barrel flute with three holes, rattles with which they scared birds from the fields, and an adaul drum, which served as the main accompaniment to the dancers. By the way, the art of dancing in the country is unusually developed, and each village has its own ensemble, demonstrating their skills at weddings, festivities and celebrations. Folklore dances are often accompanied by a demonstration of dexterous handling of cold weapons.

A significant role in the preservation and development of the culture of Abkhazia was played by Orthodox monasteries on its territory, where crafts and applied arts have been developing for a long time. The monks were engaged in the manufacture of utensils, icon painting, and the creation of frescoes. The most famous monasteries still operate here: