Articles about Armenia
by Alexis 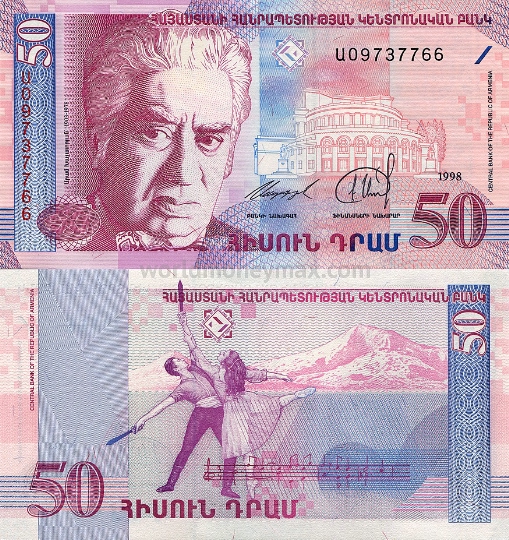 The official currency of Armenia is the dram. The name of this currency comes from the Greek drachma. The word dram is translated into Russian as money. Its own currency was put into circulation at the end of 1993, before that Soviet rubles were used. To this day, there are coins in circulation in denominations of 10, 20, 50, 100, 200 and 500 drams, as well as banknotes in denominations of 1, 5, 10, 20, 50 and 100 thousand drams. Fractional values ​​- luma were also used earlier. The Central Bank of Armenia is responsible for issuing money.

The Armenian drama is mentioned from 1199 to 1375. At that time, silver coins were called drams. When the central bank was formed in March 1993, it was planned to introduce its own currency. The exchange of Soviet rubles for drams began, at the rate of 1 dram = 200 rubles. The complete transition was made by the beginning of 1994.

What currency to take to Armenia

When traveling to Armenia, many people think about what currency is best to take with them. You can take dollars, euros or rubles to Armenia. It should be said that in any case, the imported foreign currency will have to be exchanged for local currency. Since in Armenia it is prohibited by law to pay for services in foreign currency.
Armenian dram is prohibited from importing or exporting into the country. Foreign currency can be imported to Armenia only in foreign form, and the amount over $ 2,000 must be declared.

You can exchange foreign currency to local currency and vice versa in different ways. The most profitable is to contact a specialized exchange office, here you will get the best rate and low commissions. In addition, the exchange can be made at airports, banks, etc..
As mentioned above, payment for any services is possible only in local currency, therefore, upon arrival in the country, you will still have to contact the exchange office at the airport, but here it is better to change only the minimum required to travel to the city, where you will exchange the rest at a specialized exchange office. currency.

Many services in large cities of Armenia can be paid with a card, but it is better to clarify in advance whether it is possible to pay for services in this way. In the provinces, for example, cards are almost never accepted for payment. Money in Armenia can be withdrawn from ATMs, which can be found on the streets, banks, etc..