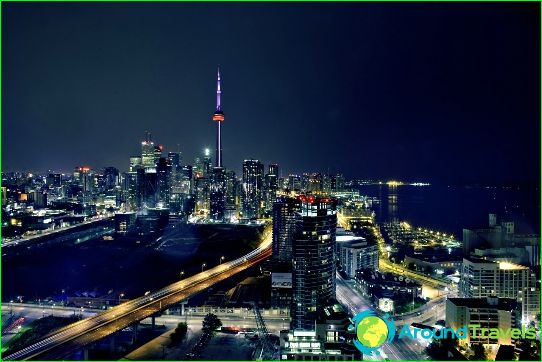 The huge country of Canada has a very low population density. About a third of him live within a 500-kilometer radius of the city of Toronto. No wonder its name is translated from Huronian as "meeting place". The huge metropolis is called the economic engine of the country, and according to authoritative magazines, it regularly ranks among the top five cities in the world with the highest living standards. However, for the participants of tours in Toronto, there are many other reasons to go on a long journey, because in this city modernity and old traditions, natural beauty and architectural attractions are mixed. And the Canadian city is one of the safest on the continent, despite the fact that almost half of its inhabitants were born far outside the country..

The city is located on the western shore of one of the Great Lakes. Ontario also affects the climate in the city, which can be called continental, but quite humid. The Hudson Bay of the Atlantic, to the north, also contributes to the weather, and the region is characterized by warm but humid summers and cold, frosty winters. In July, thermometers can rise to +35 degrees, and in winter, drop to –20 degrees. But typical temperatures are +25 and -10, respectively.
Toronto has a tradition of supporting the national cultures and customs of all immigrants, and therefore you can find Indian shops and Chinese restaurants, Italian pizzerias and Filipino souvenir shops here..