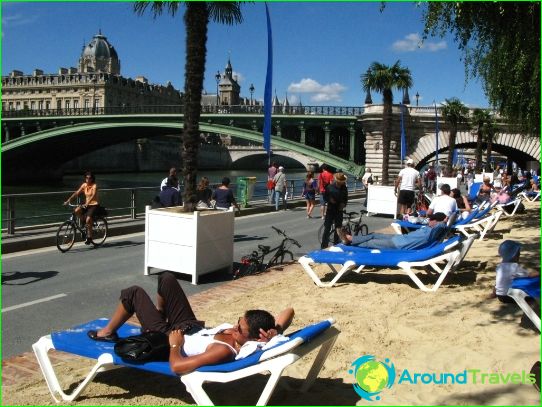 The most romantic and fashionable capital in the world undergoes amazing changes every summer. Since 2002, the City Hall of Paris continues and improves the project to create an artificial beach. The best sandy beaches in Paris are located right in the city center.
From about mid-July, traffic stops on the Georges Pompidou section of the motorway, as indicated by a special sign that notifies all drivers. The goal of the local authorities was to create a universal and comfortable vacation spot for those who, for whatever reason, cannot go on vacation. The beach is also quite popular among tourists..
Such a beach project lasts a whole month. Swimming in the Seine is, alas, prohibited. Plank beds, sun loungers, umbrellas, hammocks are installed right there, showers, changing rooms have been built, and there are even vending machines for swimwear, well, everything you need for vacationers. You can freshen up in the pool located here, children can have fun rolling in giant transparent balls, and adults can take time playing badminton.
The main idea of ​​the project is that all this visitors to the city beach can use exclusively free of charge. True, you still have to spend money on some delicious pancakes and refreshments sold in local stalls. You get incredible pleasure lying on the gentle golden sand, enjoying the beautiful views of the Seine to the sound of pleasant music.

The project is expanding every year. Increasingly, the mayor's office is puzzled by the question of the convenience of beaches for the elderly. And the idea of ​​developing a sports lifestyle is actively supported here, so on the territory of the beaches you can find swimming pools
for playing water volleyball and just for swimming, rollers are offered for rent, you can go mountaineering on special equipped climbing walls. Fans of exoticism should attend tai chi classes (one of the types of Chinese gymnastics), as well as all kinds of water games and entertainment in the form of boating, pedal boats and kayaks. There is a frisbee playground in front of the city administration building. And the beach near Pont de Sully is famous for its "musical character".
It often hosts concerts of classical music, chanson, jazz and other genres. Amazing beaches in Paris will delight locals and many tourists.

Photos of the beaches of Paris