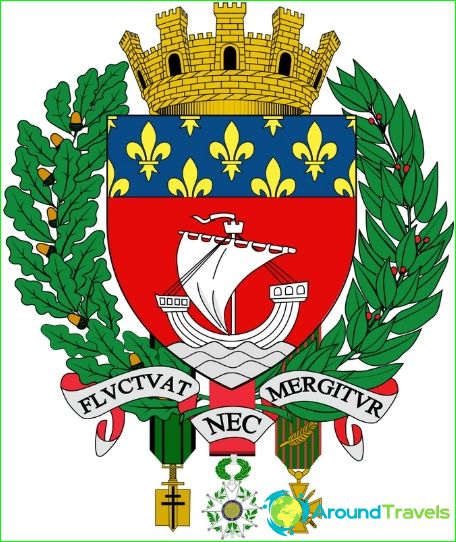 Coat of arms of paris

Nestled comfortably on the picturesque banks of the Seine, Paris is the largest city and capital of France. This is an incredibly beautiful and interesting city with a huge number of cultural and architectural attractions that perfectly illustrate its turbulent centuries-old history..

The founding and formation of Paris

During archaeological excavations, it was revealed that the first settlements on the site of today's Paris existed as early as 9800-7500. BC. The history of the modern city begins approximately in the middle of the 3rd century BC, when the Celtic tribe of the Parisians settled on the small island of Cité, from which the name of the city later came. By the beginning of the 2nd century, the settlement of Lutetia, founded by the Parisians, had become a well-fortified walled city. During this period, the first bridges over the Seine were also built. Since Lutetia was located at the intersection of important trade routes, it is not surprising that it was trade that became the basis of its economy. In the 1st century BC. the city already had its own minted coin.

In 52 BC. after exhausting battles, Lutetia fell under the control of the Romans. These events were reflected in the work of Julius Caesar «Notes on the Gallic War», which, in fact, are the first written mention of the ancient city. The Roman era made a tangible contribution to the development of the city, laying a solid foundation for its further economic development and prosperity. In fact, the destroyed Lutetia was quickly restored and thoroughly expanded, upsetting and populating also the left bank of the Seine. During their reign, the Romans built a forum, many villas, temples, baths, a huge amphitheater and a sixteen-kilometer aqueduct, as well as erected new bridges and paved good roads. By the beginning of the 4th century, Lutetia was already named «by the city of Pariziev», and by the end of the reign of the Roman Empire, the name was firmly established outside the city «Paris». In the 4th century, Christianity began to spread actively in the city..

The gradual collapse of the Roman Empire along with numerous invasions of various Germanic tribes led the city to decline and a significant decrease in population. At the end of the 5th century, Paris was ruled by the Salic Francs, and already in 508 it became the capital of the Merovingian kingdom, which actually served as a new round in the development of the city. In the middle of the 8th century, when the Carolingian dynasty came to replace the Merovingians, Aachen became the capital of the kingdom. Paris was able to regain the palm only at the end of the 10th century, and by the end of the 11th century, the city was already one of the largest European centers in the field of education and art. The peak of the city's prosperity fell on the 12-13th century. The same period was marked by active urban planning, including on the right bank of the Seine.

The following centuries for Paris were extremely difficult - the Hundred Years War (1337-1453) with the British, terrible outbreaks of plague that claimed thousands of human lives, religious wars between Catholics and Huguenots (1562-1598), the most cruel stage of which was the notorious St. night (1572), and numerous uprisings in the 17th century. But in spite of everything the city continues to grow and develop. Since the end of the 15th century, there has been a colossal cultural upsurge, which went down in world history as «french renaissance». New luxurious palaces, temples are being built, parks are being broken…. The peak of construction falls on the 17-18th century.

By the middle of the 18th century, Paris became the financial capital of continental Europe, a major center of the Enlightenment and a trendsetter. During this period, Parisian bankers actively invest in science and art. The French Revolution (1789-1799), the center of which actually became Paris, made significant adjustments to the life of the city. The revolution, which began in 1789 with the storming of the legendary Bastille, was in fact one of the most important milestones in the history of France and led to the overthrow of the absolute monarchy and the proclamation in 1792 of the First French Republic, which in 1799 was headed by Napoleon Bonaparte, who proclaimed himself emperor in 1804.

During the reign of Napoleon, much was done to ensure order and the improvement of the city. One of the largest and most important projects of Napoleon was the construction of the Urk and Saint-Martin canals, which solved the long-standing problem of providing the city with fresh water. The architectural appearance of Paris has also changed significantly..

Ahead, the city was waiting for new shocks - the overthrow of Napoleon and the subsequent restoration of the power of the monarchs from the Bourbon dynasty, the revolution of 1830 and 1848 ... The latter led to the proclamation of the Second French Republic, headed by Napoleon III. He was also the initiator of the global redevelopment and modernization of the city. Urban development work was carried out under the leadership of Georges Haussmann and largely determined the modern appearance of Paris and significantly improved its infrastructure. Despite the four-month siege of the city during the Franco-Prussian War (1871), surrender, new revolutionary unrest and the subsequent crisis, by the end of the 19th century Paris experienced an unprecedented rise and rapid economic development. During the First World War, German troops did not manage to reach Paris, and during the four-year German occupation during the Second World War (1940-1944), the city narrowly escaped massive destruction. In May 1968, Paris again became the epicenter of riots, which ultimately led to a change of government, the resignation of President Charles de Gaulle and, as a result, to a radical redistribution of society and a change in the mentality of the French..

Today, stylish and elegant Paris is the main political, economic and cultural center of France and one of the most influential global cities in the world..