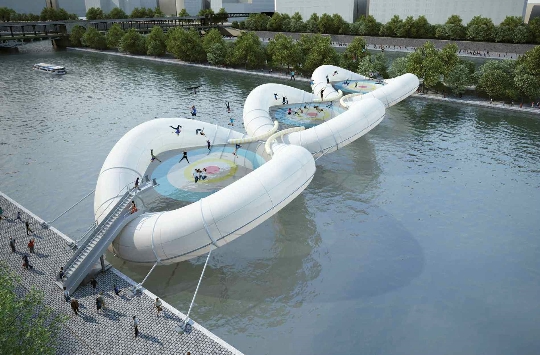 Every traveler associates Paris with something special for himself, and therefore there are no two identical routes chosen by tourists who find themselves in this city. Some people like temples and cathedrals, others prefer gardens and parks, and someone tries to walk over all Parisian bridges. There are almost four dozen of the latter here only within the boulevards, and therefore the appearance of a new and completely different trampoline bridge in Paris was received by fans of such structures with great interest..

Local design studio AZC has been proposing an unusual trampoline bridge in Paris for several years. The idea is based on inflatable modules interconnected and connecting the banks of the Seine practically in the center of the city. Initially, the idea was not successful: both the authorities and the townspeople were very skeptical about the project.
However, Paris is regularly shaken by such innovations in terms of architecture, which, according to the indigenous people, catastrophically spoil the usual harmony of the old quarters. Take, for example, the Eiffel Tower, whose appearance in the cityscape at the end of the 19th century caused a storm of protests. However, today it has become the most visited and photographed world attraction, despite the fact that some Parisians still prefer to dine in the restaurant located in it, only because the creation of the great Eiffel does not make their eyes out of there..
Equally indignant was the construction of the Georges Pompidou Center for Art and Culture, which opened in the 70s of the twentieth century. Its ambiguous appearance embarrassed respectable Parisians, and the center, while they were protesting, became the country's third largest attraction in the number of annual visitors..

A new trampoline bridge in Paris connected the eastern part of the small Swan Island and the XV arrondissement of the French capital. It consists of three 30-meter inflatable modules, whose durability has already been confirmed not only by mathematical calculations, but also by fans of everything unconventional and interesting. The modules are "sewn" into a 94-meter structure, the mesh "floor" of which allows you to see the waters of the Seine during the crossing.
The location of the new Parisian landmark was not chosen by chance. Nearby, the three-hundred-meter Eiffel Tower soars into the sky, which means that the bridge has every chance to soon become an equally visited city object..