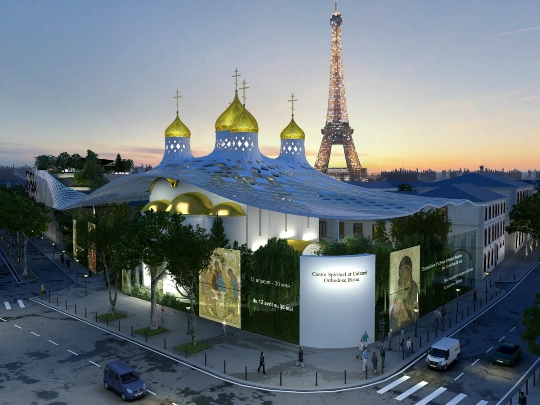 Russian students and aristocrats began to explore the way to the French capital back in the 19th century. Before the First World War, the Sorbonne had almost fifteen hundred students from Moscow and St. Petersburg, and among the political emigrants there were many Social Democrats and even terrorists. Paris became even more Russian after the defeat of the White movement during the Civil War. Officers and priests, writers and artists, princes and their servants, world-famous scientists and actors poured here - about 200 thousand people from Russia were taken over by the French land in those years.

In the second half of the twentieth century, many celebrities, whose way of thinking did not want to conform to the Soviet framework, received local passports. World-class filmmakers and musicians, dancers and artists have found their last refuge in the most Russian cemetery in Paris, located 23 kilometers south of the French capital.
The town of Sainte-Genevieve-des-Bois is connected with the capital by the RER high-speed train tracks, and its main celebrity is the cemetery of the same name, popularly called "Russian". 15 thousand graves of former Russian and Soviet citizens are buried at Sainte-Genevieve-des-Bois. This place owes its existence to the Russian elderly house of Princess Meshcherskaya, and now to the Russian government, which allocated money in 2008 to extend the lease of land and preserve the site..
I. A. Bunin and Z. N. Gippius, Kolchak's widow and artist K. A. Korovin, ballerina Kshesinskaya and brother of Savva Morozov Sergey, Rudolf Nureyev and film director Tarkovsky.

In the best traditions

However, the traveler is alive not only with sad memories, and therefore Russian Paris for him is restaurants, bookstores, and even fashion houses. All this is innumerable in the capital of France, and therefore the nostalgia that tormented on a trip can always be satisfied with a pleasant meeting with the homeland:
• The Glob Bookstore, located at 67 bd Beaumarchais 75003, is quite capable of satisfying the thirst for reading and listening to Russian music. Videotapes with the most popular Russian films are also sold here.
• In the bibliographic paradise called "St. Petersburg" at 106, rue de Miromesnil 75008 PARIS, they buy not only books, but also antiques.
• Small but nice restaurant "Prelude" is distinguished by pleasant prices and high-quality menu. You can find him at the N1 house on rue Sarasate..