Airport in Cologne: scheme, photo. How to get to Cologne airport 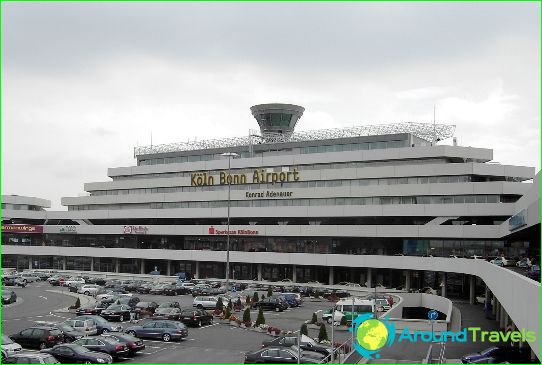 Konrad Adenauer Airport is an international airport located near the cities of Cologne and Bonn, 15 and 16 km respectively. The airport is located in the Wehner Heide nature reserve.
This airport is the sixth in Germany in terms of passengers handled per year and the second in terms of freight traffic..
The airport in Cologne is one of the few in the country that operates around the clock.

Konrad Airport has a rich history dating back to 1913. It was then that the first artillery reconnaissance flights were made. In 1939, a full-fledged airfield was built here, which was actively used during the war..
In the post-war years, the airport was owned by the British Armed Forces. Already in 1951, the first civil flights were launched, immediately after the construction of the first runway. Two more runways were commissioned by 1960.
In late 1970, a Boeing 747 wide-body airliner landed at Cologne airport for the first time..
In 1986, the US airline UPS Airlines began using this airport as its main transit hub..
At the end of the last century, an active reconstruction of the airport began, then an additional terminal building was built, as well as several parking lots..

The airport in Cologne offers a range of services to make your time at the airport more comfortable.
Various shops will allow you to buy goods such as keepsakes. Cafes and restaurants will keep passengers hungry.
If necessary, you can contact the medical center located on the territory of the airport.
In addition, services for passengers include bank branches, ATMs, a currency exchange office, a post office..
For business class passengers there is a conference room and a business center.
In the second passenger terminal there is an information office where several problems can be solved. For example, book a hotel room or buy a city map.

The airport in Cologne has ample parking, which can be booked in advance.

As mentioned above, the city is 15 km from the airport. An electric train departs from the airport early in the morning and quickly takes passengers to the city center. Alternatively, you can take the bus. The last way is, of course, a taxi. The fare will be about 30 euros.