Hamburg in 2 days: where to go in Hamburg 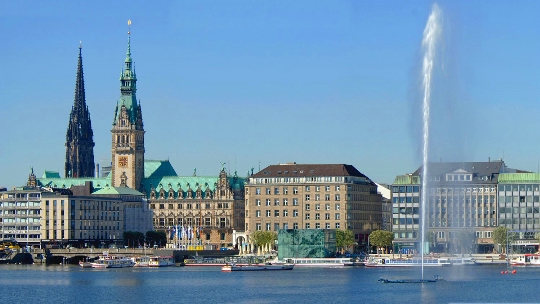 Hamburg is called the gateway to the world. The port city is located at the mouth of the Elbe, and its coat of arms depicts a fortress gate. Medieval buildings are one of the distinctive features of Hamburg, in 2 days where it is quite possible to admire all the main attractions and cultural values.

The main famous buildings of Hamburg are concentrated in the old quarters. The central square has sheltered in its stone palm the majestic building of the City Hall, where the city senate meets and the mayor works. It was built at the end of the 19th century, and the graceful spire on the clock tower seems to reach the clouds..
Among other important architectural monuments, it is worth noting the churches of St. Nicholas and St. Michael. The first temple is the second tallest building in Hamburg. Its construction began in the 11th century, and at the beginning the church was made of wood. The stone version of the graceful neo-Gothic temple was destroyed by military bombing during World War II, and today it lies in ruins. Only the 147-meter tower of St. Nicholas soars into the sky, reminding descendants of the horrors of fascism.
The Church of St. Michael, built in the Baroque style, is considered by residents to be the hallmark of the city. In the program "Hamburg in 2 days", an excursion to the temple should become a must. St Michael's Tower welcomes sailors entering the port, and its 132-meter bell tower is a great place to take panoramic shots. By the way, the clock on the bell tower of this temple is the largest in the country. Dials, eight meters in diameter, are clearly visible from the ground, and each hand, covered with gold leaf, weighs more than a centner.

To see Hamburg in 2 days means visiting at least some of its sixty museums. It is quite possible to get lost in a huge assortment of interesting expositions, but the most famous and significant museums are worth a visit:

Theatergoers will appreciate the opportunity to visit its dramatic performances in Hamburg in 2 days. For fans of musicals, a pleasant surprise will be the fact that the city in terms of the number of staged musical performances is second only to the Big Apple and the capital of Foggy Albion..