Athens in 3 days: where to go to Athens 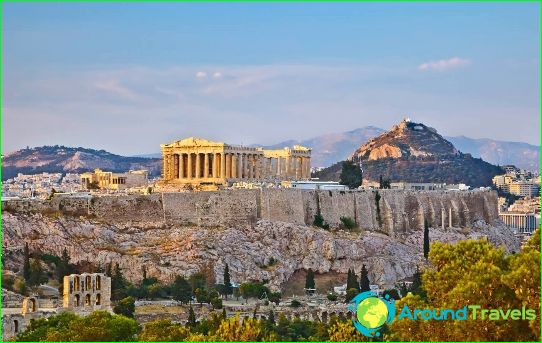 The Greek capital is not in vain considered one of the most amazing cities on the planet. Cradle of ancient civilization, Athens can provide such an abundance of tourist information in 3 days that only a well-trained traveler can handle..

The main Athenian attraction is the rocky hill Acropolis, where magnificent buildings of the Mycenaean period appeared already in the 15th century BC. Wars swept over Ancient Greece and burned down magnificent temples. In their place, new ones arose, and the Acropolis became the focus of the past and new greatness of civilizations replacing each other..
Today, many important and significant ruins of ancient buildings have survived on the Athenian Acropolis. Here you can visit the Parthenon and the Theater of Dionysus, see the statue of Athena Promachos and admire the temple of Niki Apterom. Many relics resemble only a pile of stones, but this does not lose the grandeur of the monument and the significance of the Acropolis does not diminish..

We go on a museum tour

The capital of Greece is also rich in numerous museum exhibitions, visiting which you can get acquainted with various aspects of the history and life of the state. In total, there are more than two hundred museums in the city, and it is simply unrealistic to inspect each of them in such a short time. Once in Athens for 3 days, it is best to choose the most interesting and significant ones for yourself: