Articles about Montenegro
by Ashley 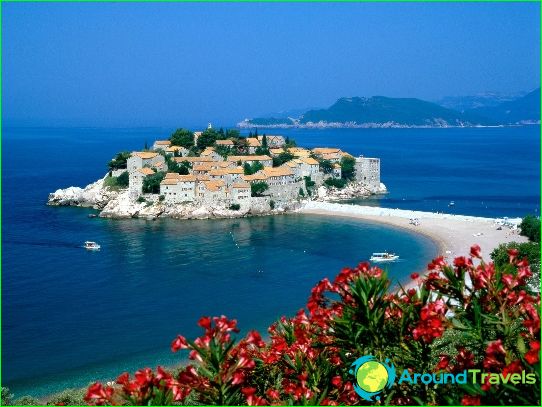 Montenegro is located on the Balkan Peninsula, on the shores of the Adriatic Sea. The coastal continental line of the country stretches for 300 km. The offshore islands of Montenegro are 14 land areas in the Adriatic Sea. Several islands are located in the Bay of Kotor. The length of the Montenegrin beaches is 73 km. In some places, sea water is visible 35 m deep. The coastline of the islands stretches for 15.6 km.

The Bay of Kotor (Boka Kotorska) cuts into the land for almost 30 km and has an area of ​​about 87.3 square meters. km. This bay is considered one of the most picturesque on the planet. It is an area of ​​the purest Adriatic Sea, surrounded by high cliffs. In the Bay of Kotor there are seven islands of Montenegro: Tsvecha, Sveti Marko, Sveti Djordje, Mala Gospa, etc. Montenegro also has islands in Lake Skadar, which is the largest on the Balkan Peninsula..

The islands of Montenegro are famous for their natural beauty. The relief of the country is very diverse. High mountains there are combined with golden beaches and islands. Montenegro is not a leader in the field of island tourism, since there are not very many remote areas of land here. However, each island in the country is beautiful in its own way. Tourists have something to see during their vacation.

The most popular is the island of Sveti Stefan or San Stefan. This is a part of Montenegro, which is built up with high class villas and hotels. Tours to the island of St. Nicholas are no less in demand. It is located next to Budva and attracts vacationers with its wonderful beaches. It is not very crowded and clean. The beaches are covered with large pebbles. The largest and most beautiful island in the Bay of Kotor is the island of St. Mark, which was previously named the island of Stradioti. It is covered with subtropical plants, olive trees, flowers. In recent years, it has been used to organize a first-class holiday among pure nature..

The islands of Montenegro are located in the Mediterranean climate zone. The country has cool winters and hot summers. There is a lot of rainfall in winter. The territory of Montenegro is small, but it occupies 4 natural areas: rocky plateau, coastline, highlands and plain. On the coast, the Mediterranean climate is clearly manifested. Hot and dry summers reign there. In July, the average air temperature is +28 degrees. The region of Skadar Lake also has a Mediterranean climate. Winters are rainy and mild there. In summer, the air warms up above +40 degrees. The water temperature is more than +27 degrees.