Home › Articles about Oman › Flag of Oman: photo, history, meaning of the colors of the national flag of Oman

Flag of Oman: photo, history, meaning of the colors of the national flag of Oman

Articles about Oman
by Amber 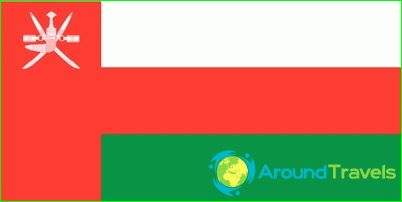 The flag of the Sultanate of Oman was adopted in December 1970 along with the country's anthem.

Description and proportions of the flag of Oman

The flag of Oman is a classic rectangular cloth, which is exactly twice the length of the width. A red stripe runs along the entire width of the flag of Oman with the emblem of Oman at the top.
The rest of the flag's field is evenly divided into three horizontal stripes of equal width, which is less than the width of the red vertical stripe along the flagpole. The upper stripe of the main field of the Oman flag is white. It symbolizes the pursuit of peace and progress. The middle part of the main field of the flag of Oman is red and merges with the vertical stripe at the pole. This shade of the cloth reminds of the struggle against foreign invaders who ever invaded the land of the sultanate. The lower third of the main field is green and emphasizes the important role of Islam - the religion practiced by the overwhelming majority of the inhabitants of the Sultanate. In addition, the green bar underlines the importance of agriculture in the country's economy..
The emblem on the flag of Oman has been known since the 18th century. It was then that crossed sabers first became a symbol of the sultanate. The sabers depicted on the emblem are positioned downward with their blades. They are in a richly decorated scabbard, and the composition is decorated with the Omani traditional khanjar, applied over the sabers. This dagger adorns the clothes of the Arabs of the Sultanate and serves as an indispensable attribute of the national costume and a traditional weapon of protection for every man of the Sultanate. Over the khanjar on the emblem on the flag of Oman, belts are superimposed, behind which a dagger was worn on the belt of an Arab man.
The emblem of Oman also adorns the Sultan's personal standard. Its banner is a red field with a green rectangular border located close to the edges of the flag. In the center of the standard is the golden emblem of Oman, on the top of which the monarch's crown is inscribed.

History of the flag of Oman

The flag of Oman was adopted in 1970 after a coup by the son of the then acting Sheikh Said bin Teymur. The new Sheikh Qaboos immediately after the seizure of power began to carry out a series of reforms concerning the country's economy. State symbols were also changed, in particular, a new flag of Oman was adopted, which serves until today. The cloth is used for all purposes on land, used on state and private ships, as well as a flag of a commercial flag.

Photos of the flag of Oman