Lisbon in 1 day: where to go in Lisbon 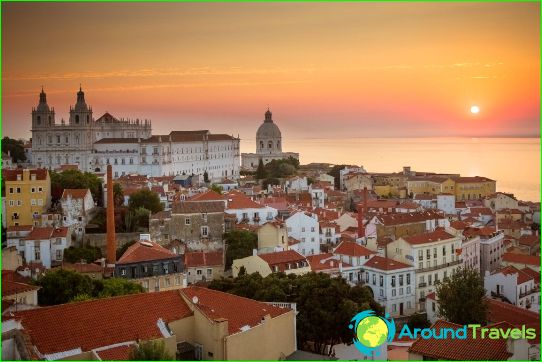 The capital of Portugal is not only the largest city in the country, but also its most important port. Its history goes back at least two millennia, and therefore buildings of various eras and architectural styles are present in Lisbon. But the amazing thing is that at the same time they are harmoniously combined with each other, creating a unique look of the old city. To see Lisbon in 1 day and try to figure out how he manages to be so cozy and strict at the same time is not an easy task.

On the banks of the Mar de Paglia

Spreading on the shores of an ocean bay, Lisbon stretches for many kilometers and cityscapes can look like picturesque huts of fishermen near the coast, and like modern high-rise areas in the business center..
The heart of old Lisbon is the Castle of St. George. The fortress is visible from anywhere in the city, thanks to its location on a hilltop. According to historians, this place served as a fortified area even under the Romans, then passed to the Moors, from whom the crusaders got it at the beginning of the 12th century. Then the castle served as a residence for many generations of Portuguese monarchs.
Lisbon began on the slopes of the castle hill, went down to the river, intertwined in the cunning pattern of old narrow streets, along which it is so pleasant to wander even today at any time of the year. Even if you are in Lisbon for one day, you can feel its charm, admire the bright ceramic tiles on the walls of houses and learn that the azulejos technique in which the panels are made is a typical Portuguese folk craft.

Museums at the edge of the ocean

Located on the shores of the Atlantic Gulf, Lisbon invites its guests to visit the Maritime Museum, which contains unique exhibits about the legendary past of Portugal. Formerly one of the most influential world powers, the country has a rich history of developing seas and oceans and discovering new lands. If time remains, and the excursion «Lisbon in 1 day» seems insufficiently saturated, it makes sense to pay attention to other city expositions: