Articles about Porto
by Alexis 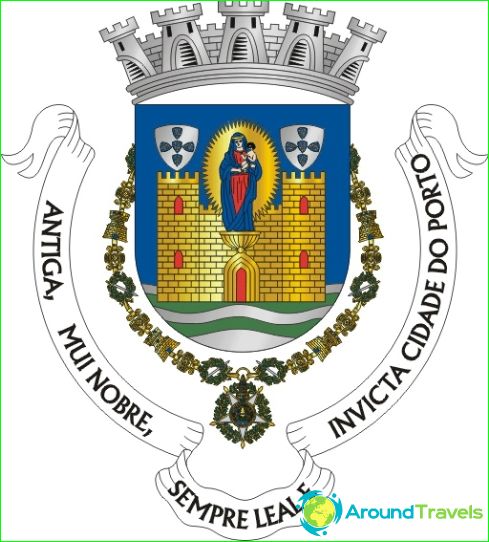 Coat of arms of the city of Porto

Porto is the second largest city in Portugal and an important economic, industrial and cultural center of the country. The city is located in the northwestern part of the Iberian Peninsula, 270 km north of Lisbon, at the mouth of the Douro River and just a few kilometers from the Atlantic Ocean. Porto is often called «the northern capital» Portugal.

The history of modern Porto dates back to ancient times, when the Iberian Peninsula was occupied by the Romans, and is more than two thousand years old. At that time, the city was called Portus Kale and was a fairly large trading port of the empire..

After the collapse of the Roman Empire, Porto was dominated by the Suevi, and from 585 by the Visigoths. In 711, during the Arab invasion of the Iberian Peninsula, Porto was one of the first to be captured by the Moors. In 868, the commander and vassal of the King of Asturias Alfonso III the Great Vimar Peres set out to recapture the lands occupied by the Moors. After the liberation of the area between the Minho and Douro rivers (including the city of Porto), with the permission of Alfonso III, Vimara Peres founded and headed the county of Condado de Portucale here, from which the name subsequently came «Portugal».

In 1387 in Porto, the marriage of King João I of Portugal and the daughter of the English duke John of Gaunt Philip of Lancaster took place, which was confirmed in the so-called «Windsor Treaty» the Anglo-Portuguese treaty signed back in 1373. The Anglo-Portuguese Alliance, still active today, is the oldest military alliance in world history..

In the 14th and 15th centuries, Porto became one of the largest shipbuilding centers in Portugal. At the beginning of the 15th century, at the initiative of the Portuguese Infant Henry the Navigator (son of King João I) from Porto, a number of expeditions to the south along the West African coast were organized, which, in fact, laid the foundations of the maritime and colonial power of Portugal, and also marked the beginning of the era «Great geographical discoveries».

In 1809, Porto suffered greatly during the invasion of Portugal by Napoleon Bonaparte's troops, and already in 1820 it became one of the centers of the Portuguese Revolution, which led to the adoption in 1822 of a liberal constitution and subsequent civil wars between adherents of absolute and constitutional monarchies. The city played an important role in the revolution of 1910 that abolished the monarchy, as well as in the 1974 revolution, as a result of which the final formation of democracy in Portugal took place..

In 1996, the historic center of Porto was declared a UNESCO World Heritage Site. Today Porto is one of the most colorful cities in Europe, in the architectural appearance of which various styles are so harmoniously combined - Romanesque, Gothic, Renaissance, Baroque, Neoclassicism and Art Nouveau..