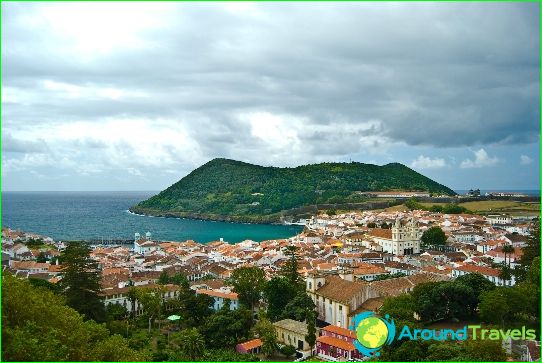 Portugal occupies the western part of the Iberian Peninsula. The island of Madeira and the Azores also belong to this country. Madeira is an archipelago located in the Atlantic Ocean. It is 1000 km away from the main part of the country. It includes the inhabited islands of Portugal - Porto Santo and Madeira, as well as small uninhabited areas of land.

General characteristics of the islands

Madeira has mountainous terrain. Its highest point is the Pico Ruivu mountain, reaching 1861 m. The main city of the island is Funchal. Madeira is home to pineapples, bananas, sugarcane and grapes. Transoceanic communications and tourism form the backbone of the island's economy.

In the North Atlantic there are other islands of Portugal - the Azores. They form an archipelago 1300 km away from the coast. These islands are of volcanic origin. The largest islands in the country are Pico, São Miguel, São Jorge, Terceira, Floris and Faial. The highest point in Portugal is Ponta do Pico Alto. It reaches a height of 2351 m. Earlier, the inhabitants of some islands were engaged in whaling, but after the reduction in the number of whales, their fishing was prohibited. Currently, the population of the Azores is engaged in tourism, fishing and agriculture. These islands are considered unique due to their picturesque nature. There are beautiful lakes, volcanic formations, green hills, flowering plants, ocean waters.

The largest island in the archipelago is San Miguel. Its attraction is Sete Cidades, a crater surrounded by lakes. The island of Graciose is known for its Sulfur Cave and underground lake. The cave, formed after a volcanic eruption, is located on the island of Terceira. The cave contains stalactites, stalagmites and an underground lake. There is a sulfur spring near the lava cave. Florish Island is the farthest from the mainland. It became famous for its waterfall, extinct volcanoes and lakes. The islands of Portugal attract travelers with ancient buildings, churches and cathedrals. The islands of Santa Maria, Faial, San Miguel are suitable for a beach holiday. There are sandy beaches covered with lava.

The weather in Portugal is consistent with a subtropical temperate climate. In the southern regions, the Mediterranean climate prevails, and in the northern regions, the maritime one. Moist oceanic winds lead to mild winters and warm summers. The vegetation cover varies in different parts of the country, which is determined by different climatic conditions. In Portugal, there are deciduous evergreen forests, oak forests, shrubs, alpine meadows. The coast is dominated by flora typical of the African coastal strip. There are growing cacti and agaves.