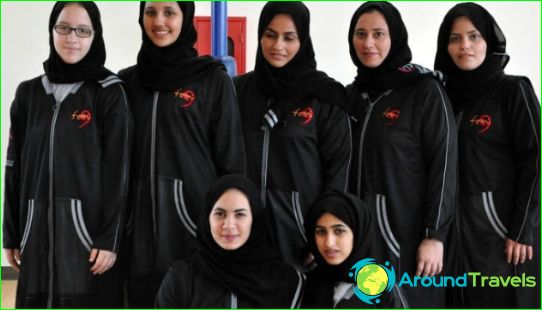 Saudi Arabia has a population of over 29 million.

Most of the country's population is concentrated in cities and oases, and the Bedouins in the eastern and northern regions of Saudi Arabia.

12 people live on 1 sq. Km. But some cities and oases are very densely populated (1000 people live per 1 sq. Km). So, the most densely populated are the territories adjacent to the coasts of the Red Sea and the Persian Gulf, and some areas are sparsely populated, in which there is no permanent sedentary population at all (the Dakhna, Rub al-Khali, Nefud deserts).

The official language is Arabic, but in Saudi Arabia they also speak English, Tagalog, Indonesian, Hindi, Urdu and others..

The overwhelming majority of Saudis are Muslims (Sunni, Shi'ism), the rest are Catholic.

On average, Saudis live to 68.

Quite good indicators are due to the fact that the state allocates sufficient funds from the budget for health care (8%). Health care in the country is at a high level: large administrative districts, as well as the capital, boast clinics that are considered the best in the Middle East (highly qualified specialists work here and highly specialized equipment is used).

Traditions and customs of the people of Saudi Arabia

Families in Saudi Arabia are large, as representatives of different generations live under the same roof or in at least one village.

Despite the fact that modern families are becoming smaller in the number of cohabitants, local social relations are inextricably linked with concepts such as clan and clan..

Family members and good acquaintances greet each other with hugs or kisses on both cheeks. As for unfamiliar people, it is customary in the country to greet them with a European handshake..

If you are going to Saudi Arabia, keep in mind that it is better not to wear shorts and short skirts here - modest clothes are welcome here.