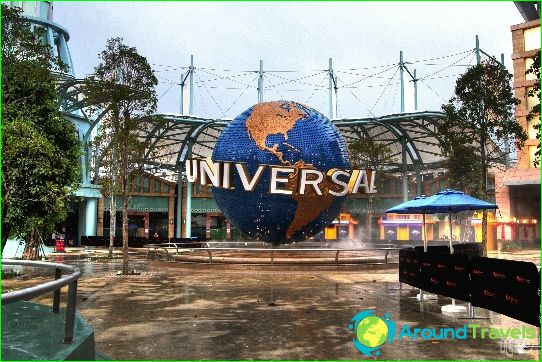 For a long time, Singapore was considered a city that is best visited only by experienced tourists. Indeed, there is no clear sea and beautiful sandy beaches where you can lie carefree all day long. There is also no freedom that is inherent in the resorts of Turkey, Egypt and many European countries. Perhaps the greatest savagery for our tourist may seem corporal punishment to which violators of numerous prohibitions are subjected. True, tourists are exempted from them and pay fines, but this usually does not change the general impression. Although, having properly figured out what's what, you can see a lot of interesting and even unique here, and various entertainment centers and attractions in Singapore certainly deserve to get to know them better.

Deserved number one on the list of the most attractive attractions. This place was created for those who cannot imagine life without extreme. In fact, it is a whole rope town, which can be crossed by overcoming various artificial obstacles..

The main feature of the park is a steep 450-meter descent from the highest hill to the shore of Siloso beach. Another attraction is the skydiving tower and climbing wall. In general, everything you need for an active holiday. Has its own website http://www.megazip.com.sg/.

Also known throughout Singapore, this attraction is in many ways absolutely unique. It is a kind of hybrid of sledging and go-karting. The tourist is invited to go down at a breakneck speed along one of the specially prepared trails like a sled, equipped with a steering wheel and a brake system. At the moment, tourists have access to two tracks: «The path of Dragon» (688 meters) and «Jungle path» (650 meters).

Everyone who has the opportunity to visit this corner of Asia is simply obliged to look here at least once. After all, the Skyline Luge attraction has no analogues yet and, apparently, will not receive it in the near future. Also has its own website http://www.skylineluge.com/.

This amusement park is already more familiar to the domestic ordinary tourist. As the name implies, it is based on the films of the film studio of the same name, so that every traveler will find a lot of friends here. The main attraction of the park is a giant roller coaster that claims to be the tallest in the world.

Photos of attractions in Singapore