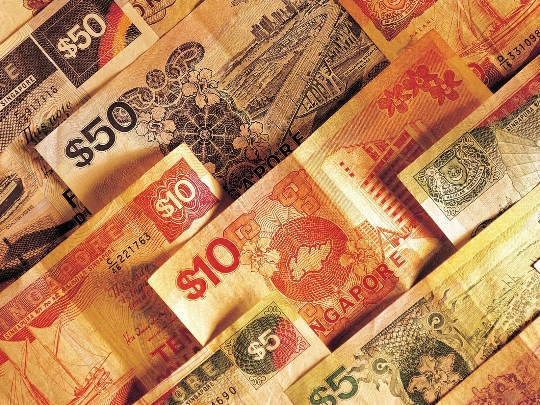 Whatever the currency in Singapore is, throughout the entire existence of this country, it was one of the most stable in the world. This is because Singapore's money - dollars - has always been tied to the British pound sterling..

Young is not always green

In Russian, for obvious reasons, the word «dollar» associated with an adjective «green». This is partly true for one of the youngest (1967) currencies in the world - the Singapore dollar. The five and fifty dollar bills have a green-turquoise hue. The rest of the banknotes in their colors are more reminiscent of the European Union. In addition to those mentioned, there are also bank notes in denominations of ten, twenty, one hundred and one thousand dollars. However, few people manage to see a thousand-dollar bill, for example, like its American counterpart - such are the customs of cash circulation.
Already, regardless of pegging to the British pound sterling, Singapore's money remains a stable means of payment, and therefore, within the country, fluctuations in the exchange rate of the dollar against foreign currencies are very insignificant..

What currency to take to Singapore

The unimpeded import of currency into Singapore is burdened only by filling out a declaration. And then - you only need to declare an amount in excess of 30 thousand Singapore dollars (this is approximately 24,000 US dollars).
As in almost all other countries, banknotes with portraits of American presidents are the most popular foreign currencies. Historically, the British pound is also held in high esteem. So what kind of currency to take to Singapore, you don't have to think too much - take the American one. She can even pay in many large centers.
Currency exchange in Singapore is no problem either. Banks are open all working days, many large banks - even on weekends.
However, it is worth noting that there is a fairly clear tendency in the country towards the (informal) transition to non-cash payments. Singaporeans themselves practically do not use cash, but pay with credit cards. Moreover, a distinctive feature of the system of monetary circulation and the financial services market can be confidently called the presence of terminals for paying with cards, even in scanty trading establishments and catering outlets. And almost every cafe, even a very small one, has an ATM..
So to the question of what currency to take to Singapore, our answer is obvious - take a credit card. And no problem.