Airport in Bratislava: scheme, photo. How to get to Bratislava airport 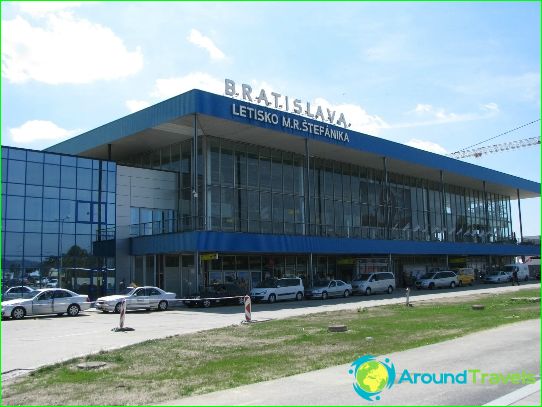 The airport in Bratislava MR Stefanik, located in the vicinity of the Slovak village of Ivanka, is on a course to provide quality passenger service and the development of civil aviation in Slovakia. The relatively small airport serves domestic and international flights.
Every day, aircraft depart from here to Amsterdam, Bucharest, Cologne, Manchester, Paris, Moscow and other cities of the world. There are about 20 of them in total. With the entry of the country into the Schengen zone, the airport very quickly began to re-equip and expand the geography of flights.
The main air carrier of the enterprise is still the Slovak company Travel Service Airlines, which operates about 30 daily flights. However, cooperation with companies from other countries Ellinair (Greece), Ryanair (Ireland), Bulgarian Air Charter (Bulgaria) also contributes to the development of tourism in the country..

The beginning of aviation in Bratislava is associated with the first flight from Prague to Bratislava in October 1929, when the AERO-14 biplane landed at Vajnory airport, there was only one passenger on the ship. Even then it became clear that the proximity to the Carpathian Mountains would not give the existing airport proper development. And in 1946, the government of the country decided to build a new airport in the vicinity of the settlement of Ivanka, where it is located to this day..
In the early 90s, the airline carried out the reconstruction and expansion of the airport, carrying out technical re-equipment of the runway and dividing the arrival and departure zones of passengers. But with the entry of the country into the Schengen zone, a larger-scale reconstruction of the airport was required. Customs control zones were introduced, in just 16 months a new terminal was built in the departure area, the reconstruction of the old one began, the airport runway was strengthened and expanded, and other measures were taken to improve the operation of the airline. The air harbor is thoroughly prepared for receiving and servicing international flights.

On the territory of the airport in Bratislava there are all the necessary means to ensure safe and comfortable passenger service. There is an electronic board that provides information on the movement of aircraft. Information services, ticket offices and post office work. The airport has an area for passengers traveling in VIP class. And also organized additional services for the disabled.

From the Ivanka airport in Bratislava, there is a regular movement of railway transport and regular buses. Also city taxi services offer their services..