Airport in Abu Dhabi: scheme, photo. How to get to Abu Dhabi airport

Articles about Abu Dhabi
by Alexis 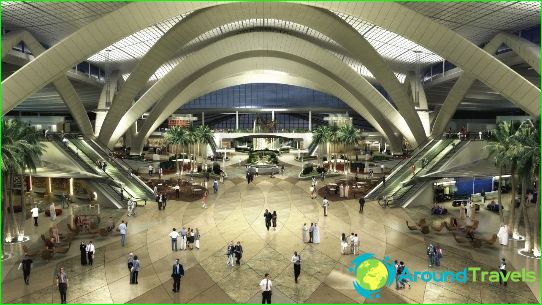 The airport in Abu Dhabi is international and connects more than 80 cities from 49 countries of the world. The airport is located between the cities of Abu Dhabi and Dubai. Last year it was awarded the title of Best Airport in the Middle East for the second time.

The airport in Abu Dhabi was built in 1982, since that time it has been considered one of the fastest growing airports in the world. By the end of 2011, more than 10 million passengers were served and this value does not stand still.
To date, the airport in Abu Dhabi has 3 terminals, in addition, the construction of the fourth is underway, which, according to forecasts, will be able to serve about 20 million passengers per year. The first two terminals are served by 32 airlines, while Terminal 3 is built specifically for Etihad Airways.

The airport is ready to offer passengers waiting for their flight a wide variety of services. First, there is a hotel right on the territory of the terminal, where the passenger can relax. In addition, you can go to Duty-free shops, have a snack or a hearty meal in cafes and restaurants. There are also designated smoking areas in the terminals..
If necessary, you can seek medical help.
In addition, those who wish can visit the fitness center or golf club, as well as take advantage of the relaxing spa treatments..

Like any major airport, the airport in Abu Dhabi has a business class lounge - this is a lounge with superior comfort. Upon arrival, airport staff will meet the passenger and serve at the highest level.

How to get to the city?

Transport links to the city have several options. Firstly, it is a taxi, perhaps the most expensive and fastest way to get to the city. The cost of the trip will be about $ 16.
In addition, a tourist can always use public transport. The bus leaves for the city every 30-45 minutes. The fare is just under a dollar.
It should be added that those who arrived by plane from Etihad Airways can get to the city by shuttle bus for free. Bus departure times are set by the timetable.