Home › Articles about Ukraine › Flag of Ukraine: photo, history, meaning of the colors of the national flag of Ukraine 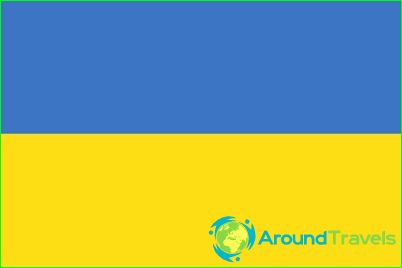 August 23 is the official date of celebration of the day of the state flag of Ukraine. Today the flag is an obligatory attribute and symbol of statehood. After all, it is the state flag, like the name of the state itself, that is designed to express the essence of the country. However, getting acquainted with the history of the flags of different countries, we can conclude that the fate of the Ukrainian flag is very peculiar, since for a very long time it was under the strictest ban and had two versions.
It is interesting that the "zhovto-blakytny" flag appeared not among the Ukrainian Zaporozhye Cossacks, who preferred yellow-crimson symbols, but in 1917-1918. At the same time, then two options were officially approved: West Ukrainian and East Ukrainian. Their color scheme was identical, but differed in the placement of colors..
The East Ukrainian flag was "zhovto-blakytny": yellow on top and blue below. This position is more consistent with the coat of arms of Ukraine, where the yellow trident is located on a blue background. Therefore, we can say that it is such a flag that corresponds to the laws of heraldry. But the flag of the West Ukrainian People's Republic was exactly "blakytno-zhovty", contrary to these very laws, but this did not prevent it from subsequently becoming the official flag of sovereign Ukraine. At the same time, it was this flag that was officially adopted by Hrushevsky in 1918, who became the first president of Ukraine by decree of the Central Rada. Subsequently, it was strictly prohibited during the Nazi occupation and Soviet rule. The state flag of Ukraine was returned and approved on January 28, 1992, shortly after the collapse of the USSR and Ukraine's independence..
The interpretation of the national flag, which is two equal horizontal stripes of blue and yellow, characterizes a golden wheat field under a blue sky. Also, blue symbolizes rivers and mountains, and yellow is a tribute to the memory of Kievan Rus..
However, there is still an opinion that the officially adopted color of the flag of Ukraine is inverted and contrary to all the rules of heraldry and the old interpretation. So, it is assumed that the combination "yellow is above, and blue is below" is intended to reflect the eternal symmetry of the divine harmony of two elements - fire and water, and not vice versa.
Today there is no official interpretation of the flag's color scheme, and its size is classic for all countries of the world - 3: 2. It follows from the above that the interpretation of the colors of the flag has changed over time, depending on the tastes of contemporaries and political fashion..

Photos of the flag of Ukraine