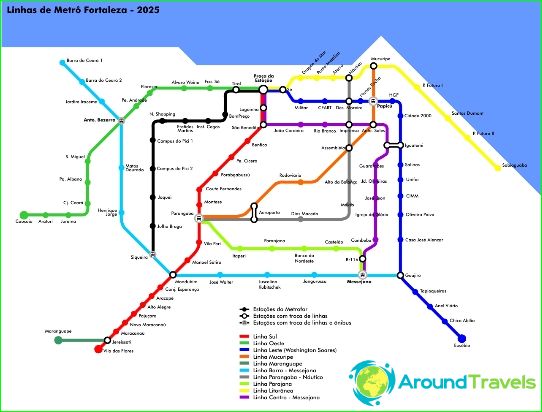 In the Brazilian city of Fortaleza, the metro was opened relatively recently. In October 12012, the first stage of a new type of urban public transport was put into operation. Line 1 of the Fortaleza metro runs from the city center in a southerly direction. It is marked in red on the diagrams, its length is 24 kilometers, on which there are two dozen stations. Construction began in January 1999 and lasted for thirteen long years.
In 2014, a second route was added to the Fortaleza metro. The new line received a blue-green designation and stretches for 19 kilometers along the bay, on the shore of which the city is located. In the western part of Fortaleza, route number 2 makes a right-angle turn and goes southwest. On the blue-green line for the needs of passengers, 23 stations are equipped with the latest technology..
The total length of the already built Fortaleza metro lines is 43 kilometers. In the future, it is planned to build three more branches, together with which the length of all tracks will be more than 60 kilometers.

You can buy travel documents for the Fortaleza metro in specialized automatic devices at stations. The machines are equipped with a menu in English.