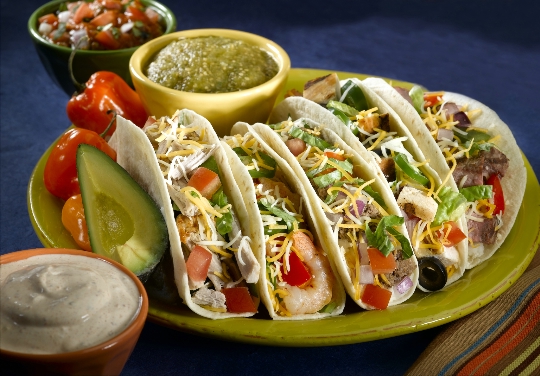 Mexican cuisine is presented as a synthesis of Indian, Aztec and Spanish gastronomic traditions (Mexican cuisine is more than 30 centuries old, and during this time it has managed to keep many delicious secrets).

Vegetables, grains, legumes, meat and seafood are most commonly added to Mexican dishes. A special role belongs to corn - fried, boiled, grated with cheese and pepper as an addition to meat. For example, corn flour is used to make "tortilla" - Mexican flatbread and "taco" - stuffed corn flatbread..

Mexican cuisine is quite spicy due to the addition of cilantro, hot chili peppers, garlic, serrano pepper, avocado leaves, caraway seeds, and jalapeno peppers to the dishes. Fish and meat dishes are most often complemented by sauces, such as guacomole (which includes tomatoes, avocados, onions and peppers) and salsa (based on black pepper, tomatoes, pepperoni, garlic and chili). And you should also try dishes from the nopal cactus (flowers, fruits, seeds and leaves are taken for their preparation).

As for desserts, in Mexico you will be offered to feast on sweet corn soufflé, mango with whipped cream, pumpkin in syrup, fried sugar cane ("kanas asadas").

Where to try Mexican food?

When planning to visit a Mexican restaurant, it is worth considering that not all of them can be entered in casual clothes - some establishments have a strict dress code..

To satisfy your hunger in Mexico City, you can drop by "Dulce Patriaen Las Alcobas" (in this institution, if you wish, you can sit on the open terrace, and also order pumpkin soup with vanilla, corn stew, a special cocktail with mezcal from the menu), in Cancun - in " La Destileria "(here it is recommended to taste nachos with meat baked under a cheese crust, tripe soup, fajitos with meat and salsa sauce, and tequila).

Interested in national cuisine? Surely, you will take an interest in the "Seasons of my Heart" (Oaxaca) culinary courses - taught by renowned Mexican chefs. Here you will be introduced to Mexican cuisine, and will also teach you how to turn delicious food into healing food using spicy medicinal herbs. In addition, if you wish, you can take a special course on forest mushrooms and summer vegetables here..

You can come to Mexico during the Chocolate Festival (Villahermosa, November), the Tamale Festival (Mexico City, January) or the Festival de los Sabores (Guanajuato State, November).