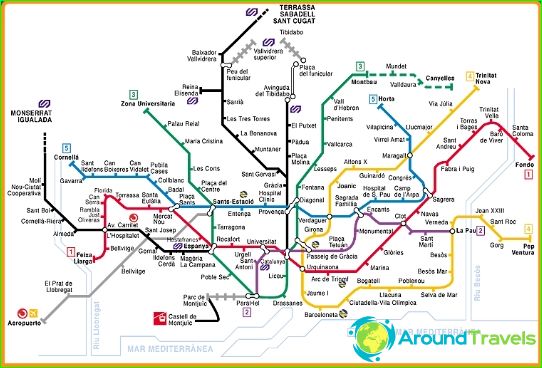 Barcelona metro map
The history of the metro in Barcelona began at the end of 1924, when the first line of the Barcelona metro was opened in the city, which connected Lesseps station and Plaza Catalunya in the city center. Two years later, on the eve of the World Exhibition, the Second Line was opened - it connected two railway lines in the city. Further development of the Barcelona metro was interrupted by the outbreak of civil war in the old days. Construction continued only in 1946 after the end of World War II.
Currently, the Barcelona Metro consists of 11 lines, covering the capital of Catalonia and its suburbs, and 163 stations. Barcelona's rapid transit system also includes the funicular and the Trambaix and Trambesòs tram lines, which are integrated with the metro..
The main problem of Barcelona metro stations is accessibility for wheelchairs and for parents with strollers. Many stations are not available for them, there are prospects in solving this issue - the metro system is being improved, a large number of elevators have appeared in the infrastructure improvement project from the street to the checkout level, then from the checkout level to the platforms - today many stations still do not have such access. Another problem of the Barcelona metro is poor air conditioning of cars, stations and crossings..

Barcelona metro tickets can be purchased from vending machines or ticket offices at all metro stations. You can choose either a single ticket valid in time for all types of transport in Barcelona, ​​or a card for several trips - for example, the T10 transport card entitles you to 10 trips not only in the metro, but also other modes of transport in the city center, including the express to airport. The validity of a ticket for a one-time transport card for one trip or trips by several types of transport is no more than 1 hour 15 minutes after the passage (composting).
A free map for planning your trip can be found at the entrance to the metro, as well as at ticket offices.