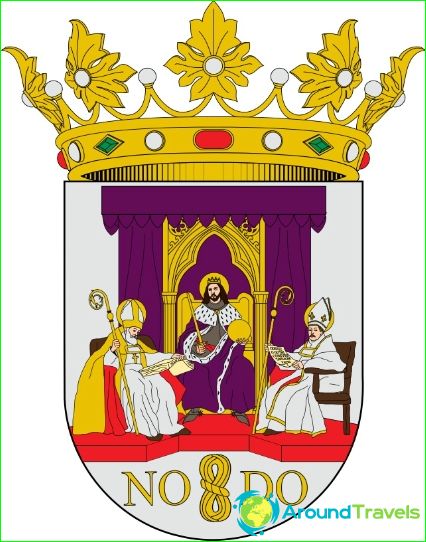 Coat of arms of Seville

Spanish Seville is the capital of the province of the same name and the autonomous community of Andalusia and the fourth most populous city in the country. Seville is located in the south of Spain in the fertile valley of the Guadalquivir River and today is a major economic, industrial and cultural center, as well as one of the most popular tourist destinations in Europe..

The exact date of the founding of Seville is not known for certain. Historians believe that the first settlement was called "Spal" or "Ispal" and already existed during the Phoenician colonization of the Iberian (Iberian) Peninsula, and the first settlers were representatives of the Tartes culture. A long-standing legend says that the city was founded by the famous hero of ancient Greek myths, Hercules..

In 206 BC. during the Second Punic War, the city was conquered by the Romans and received the name "Hispalis". During the Roman era, the city developed rapidly as an important trading port and flourished. After the collapse of the Roman Empire, the city was repeatedly attacked, ending up under the control of the Vandals, and then the Visigoths, who dominated the region in the 6-7 centuries. During this period, the city was called "Spali" and was a major cultural center.

In 712, as a result of the Arab invasion of the Iberian Peninsula, the city fell under the rule of the Arab Caliphate and was renamed "Ishbilia", from which the modern name of the city - Seville later came from. The Arabs dominated Seville for almost five centuries, which undoubtedly had a huge impact on its culture and architecture. This period had a favorable effect on the city's economy..

In November 1248, after a long siege, Seville was conquered by the troops of Ferdinand III of Castile. The royal residence was moved here, and the city received a number of privileges, including the right to vote in the Cortes (legislative body). Despite a number of demographic and social upheavals (outbreaks of plague, anti-Jewish uprising in 1391, etc.), Seville grew and developed both economically and culturally. The city has undergone significant changes in its architectural appearance..

In 1492, Columbus, whose expeditions were generously sponsored by the Spanish monarchs, discovered America, and already in 1503 the so-called Casa de Contratacion or House of Commerce was founded in Seville, which governed all the research and colonization activities of the Spanish Empire. The port of Seville became a monopoly on transoceanic trade, and the city became the commercial center of Spain. The 16th century in the history of Seville is rightfully considered a "golden era" in the field of culture, architecture and art.

In the 17th century, the economy of Seville, against the backdrop of a pan-European crisis and a strong outbreak of plague, which took away almost half of the city's population (mid-17th century), sharply declined. Navigation along the Guadalquivir River became more and more difficult due to the shallowing, which ultimately led to the transfer of the "Casa de Contratation" to the port of Cadiz in 1717. Seville lost its influence and commercial importance.

Global industrialization, which swept virtually all of Europe in the 19th century, did not leave Seville aside. This period in the history of Seville is marked by the construction of the railway, electrification, as well as large-scale urban planning. The city underwent significant changes and modernization in the form of the construction of many new buildings, redevelopment and expansion of city streets and squares in preparation for the "Ibero-American International Exhibition" in 1929, preparations for which began in 1910.

From the first days of the Spanish Civil War (1936-1939), Seville actually became one of its main epicenters. Seville survived the Second World War relatively calmly, since Spain did not officially take part in it. The post-war decades were marked for the city by large-scale construction, severe floods and an underground trade union movement.

In 1992, Seville hosted two grand events - the World's Fair and the celebration of the 500th anniversary of the discovery of America. In connection with these events in Seville, the airport was reconstructed, new roads, bridges, a railway station, a high-speed railway to Madrid and much more were built..