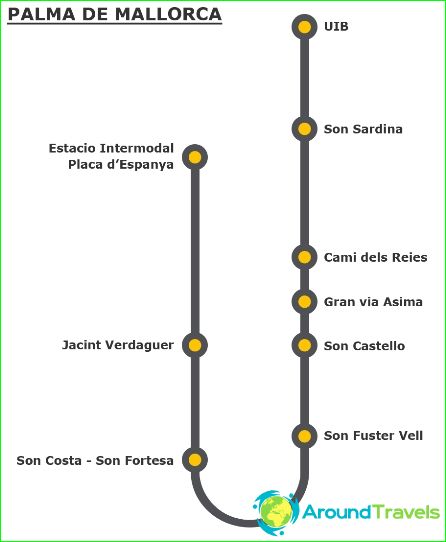 The capital of the Balearic Islands archipelago, which is part of Spain, Palma de Mallorca has its own metro system, which is operated by the state railways. In total, the Palma de Mallorca metro line has one line, the total length of which is just over seven kilometers. Nine stations are open on the route for passengers to enter and exit.
In 2004, the authorities decided to build a subway in the capital of the Balearic Islands, which was supposed to connect the University of Palma de Mallorca with the city center. For the implementation of the project, which began in 2005, the existing railway lines to the city of Inca were relocated to the tunnel. The metro tracks were laid in parallel, and today the subway has four tracks, which stretch from Son Costa - Son Fortesa to the Plaza de España station. Two years after the start of work, the Palma de Mallorca metro began its work. Her regime was called "preliminary".
The only metro station in the capital of the Balearic Islands located on the surface is Son Sardina. All the rest are underground, located at a depth of about eight meters. The side platforms of the stations are five meters wide.
The subway line is a narrow gauge, the current is supplied to it by means of an overhead wire, and the car fleet includes six trains. For most of the route, trains go through an underground tunnel, reaching the surface for only 2.5 km. The entire route is covered by the train in about 13 minutes..
The Palma de Mallorca metro crosses the city from northwest to southwest, making a nearly right-angle turn around the center. On public transport maps, the subway line is indicated in red.

Trains start at 6.15 am from Plaza de España station and end at 22.50 on the last flight from the University. The train movement interval is unchanged throughout the day and is 13 minutes.

Payment for travel in the Palma de Mallorca metro is carried out using plastic cards purchased at the stations at the box office. The metro is the cheapest in terms of surface types of urban public transport..