Home › Articles about the USA › USA holidays are traditions. US National Holidays 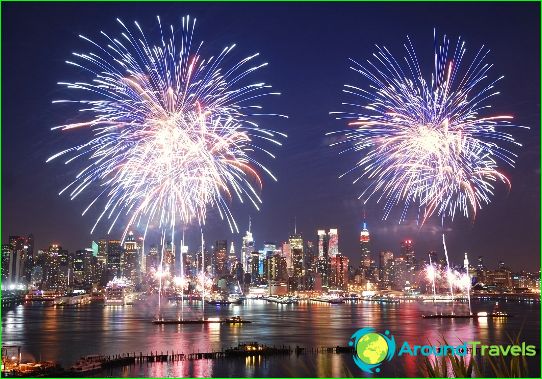 US holidays are not only official celebrations, but also dates that, although they are not days off, are very much loved by Americans..

Event tourism in the USA

Tours to New York are very popular on New Year and Christmas holidays. To immerse yourself in the atmosphere of celebration, it is worth strolling along the streets of New York, taking a picture against the background of a Christmas tree in Lower Square, admiring skyscrapers and buildings in Manhattan, illuminated by illumination, and also visit the enchanting New Year's shows where you can meet Santa and Mrs. as nice to the Russians as Santa Claus and Snegurochka). In addition, New Year's festivities are accompanied by performances by show business stars, fireworks and other interesting events..

As a souvenir, you should definitely take a picture with Santa Claus, elves, New Year's reindeer. Also, don't miss out on the ice skating rink in Central Park or Bryant Park. Don't forget to visit the Christmas markets too. So, for example, at your service - a fair in the building of the Grand Central Terminal (by visiting the Vanderbilt hall, you can see the laser show).

And for motorists, tours are organized to visit the Auto Show in Detroit (mid-January). At the exhibition, which lasts about 10 days, everyone can admire the latest models of cars, concept cars, electric vehicles.

Despite the fact that the United States is a country of emigrants, there are many purely American holidays here that unite all citizens of the country, regardless of their faith and nationality..