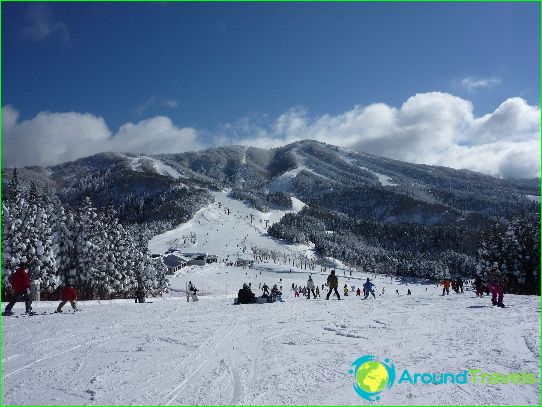 Japan is a ski and snowboard power. Representatives of the Land of the Rising Sun perform with dignity in international competitions of the highest level, and the ski resorts of Japan are considered one of the best in the world. This is quite understandable: what is difficult to deny to the Japanese is clarity, organization and the highest level of technical equipment..

Niseko Hirafu is the largest ski resort in Japan on the island of Hokkaido. A sea of ​​snow and off-piste skiing - these are the characteristics that professional skiers give it. It is considered the best in the cohort of international resorts in the country. The season here lasts for half a year, and «black» There are more trails for ski gurus than anywhere else. 18 lifts help athletes get to the start sites without queues and traffic jams, and the excellent snow park makes Niseko Hirafu very popular with snowboarders.
The Happouan Resort on Honshu Island is famous for hosting the Olympic Games in Nagano on its slopes. Luxurious panoramic views of the mountains and the difficult ski region are the main advantages of the resort. You can start here in December and finish in May, and therefore skiing in Happouan is considered one of the longest. The resort's pistes are serviced by 23 ski lifts, which ensure the transport of athletes not only to the ski slopes, but also to the snow park with figures for the boarders. The longest slope in Happouan is more than eight kilometers, and there are four suitable slopes for beginners..
Niseko Higashiyama Resort is part of the general Niseko ski area and is distinguished not only by an enviable length of the season, reaching six months, but also by the highest quality snow. Of the fourteen local routes, four are marked «black», five - «red», and the rest «blue». This suggests that Niseko Higashiyama is more suitable for advanced athletes. Although the school for beginners on the slopes here is open to everyone. Ten lifts ensure an uninterrupted skiing schedule with typical Japanese punctuality, and the top level of the local snow park is appreciated by every snowboarder who comes to the resort..

There is no special entertainment program in Japanese resorts - it is not customary here. But there is an opportunity to take excursions to nearby cities and get acquainted with the authentic culture and local attractions.