Home › Articles about the Netherlands › The beaches of The Hague: photo. Best sandy beaches in The Hague (Netherlands)

The beaches of The Hague: photo. Best sandy beaches in The Hague (Netherlands)

Beaches in The Hague 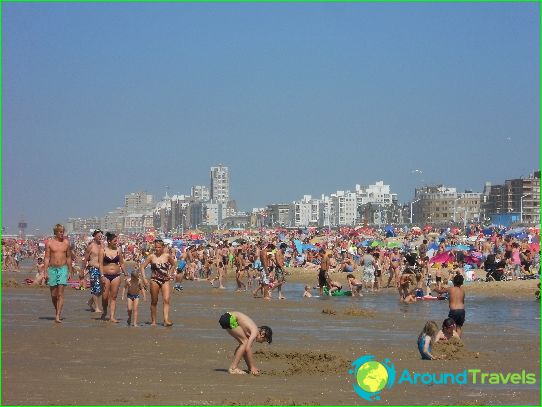 The Netherlands is a northern country, but it belongs to the part of Europe that the Gulf Stream warms with its current. Therefore, even in the North Sea, you can swim here without risking getting a cold out of habit. Once in the summer in The Hague, you can visit two of the city's main beaches. The most popular of these is Scheveningen, located in the northern part of the city. The second, Käikdown, can be found in the west of the metropolis. To visit the best sandy beaches of The Hague, you have to take a 15-20 minute "walk" - by tram. In winter or early spring, you can also look at the city's beaches if you want to visit fish restaurants and admire the fantastic landscapes. You will be impressed by the rugged North Sea and huge sand dunes. However, the beaches of The Hague are different in themselves, and each is good in its own way.
The history of Scheveningen beach dates back to 1818. Then it was a fishing village, which has not yet entered the city of The Hague. One fisherman decided to offer his rich fellow citizens, of course, for a certain fee, to use the closed sea baths. This was done so that ordinary people would not be watching well-off vacationers. Thus, large salt water baths were installed, and regardless of the weather, a very comfortable temperature was maintained in them..
The waters of the North Sea, being salty, had healing properties, so the representatives of the local bourgeoisie accepted the proposal with a bang. The enterprising fisherman did not limit himself to this and designed carriages on the beach, which served both as a locker room and a device that descended into the water..
Sick representatives of high society began to regularly gather at Scheveningen beach. In turn, The Hague expanded and merged with Scheveningen.
Over the years, the aforementioned wooden structure that has become flimsy, which covered the sea baths on the beach, has gradually evolved into a luxurious seaside resort, where there is a full range of amenities for patients. A concert hall opened, followed by a casino and restaurants. Today the health resort, named "Kurhaus", is considered one of the most respectable health resorts in Europe..
Even the Queen of the Netherlands traditionally celebrates her birthday here, so once a year a true royal ball is held in Scheveningen..
Nearby, on Primorsky Boulevard, you can visit the Scheveningen Marine Life Aquarium. This maritime museum is the largest in the Netherlands.
This beach is popular even on New Years. Tourists from all over the world gather here for traditional winter swimming. All kinds of sports and festivities are often organized here. There is a very spectacular fireworks festival every Saturday in the summer..
Käikdown Beach, in the southwestern part of The Hague, is not so popular with tourists, and it is more often visited by locals. It is much smaller than Scheveningen. In addition, there is only one hotel nearby, but there are several restaurants and bars. But the nature here is very beautiful, there is no big hustle and bustle, and therefore it is convenient to take walks on bicycles or horseback along the coast.

Photos of the beaches of The Hague