Currency in the Netherlands 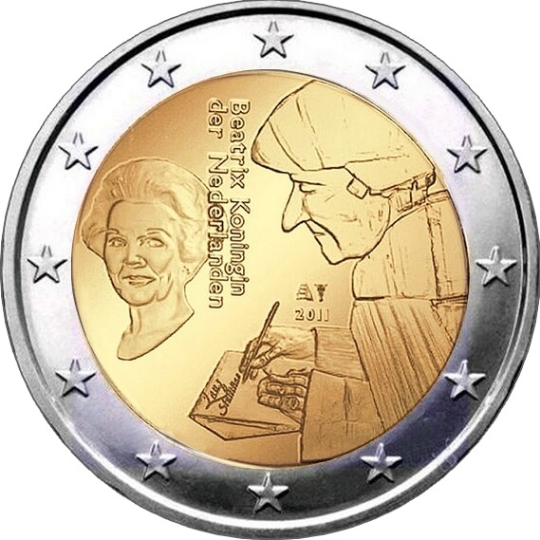 The Netherlands is currently a member of the European Union. Since the country has been part of the euro zone since 2002, you don't have to ask what currency is in the Netherlands. As in the rest of the European Union, the currency of this country is the euro. Until the moment of joining the European Union, the Dutch guilder was in use. By the way, money in the Netherlands has been a strong currency for many European countries for many years. Already at the beginning of the 20th century, the kingdom was gradually abandoning the national currency in favor of the French franc. Since 2002, all monetary units have been replaced by the euro, which is still used today..
Money is circulated in the Netherlands in the form of banknotes and coins. The denomination is different, banknotes generally have a denomination that is a multiple of five.
The euro in the Netherlands differs from the euro that is minted in other European countries. On the national side is the profile of Queen Beatrix. And on the coins, the denomination of which is 1 and 2 euros, the inscription flaunts «God with us» in Dutch. They also issue souvenir coins in denominations of 5 and 10 euros. But they can only be used as a means of payment in the Netherlands. True, such coins are extremely rare now and in their homeland, since they are almost immediately redeemed by collectors..

What currency to take to the Netherlands

It is not difficult to buy euros today in any country. So, before traveling to the Netherlands, it is better to take care of the cash. You can take with you another currency in the absence of the euro, but in this case there is a risk of losing at the exchange rate. The Russian ruble is not happy with a stable exchange rate, and the US dollar does not always have a good coefficient against the euro.
Currency exchange in the Netherlands is best done at the post office or banks. They offer the most optimal rate and a small commission. Exchangers work at airports, shops, train stations and hotels, but the rate is higher, as is the percentage of the commission.

Currency can be imported into the Netherlands in any amount. Customs regulations only require the declaration at the border of amounts over 10,000 euros. It is convenient to take plastic cards with you on a trip. Credit cards of the world's major payment systems are accepted almost everywhere. A large number of ATMs in the city will allow you to quickly withdraw the required amount of cash from the card. Special student or youth cards allow currency exchange without commission..