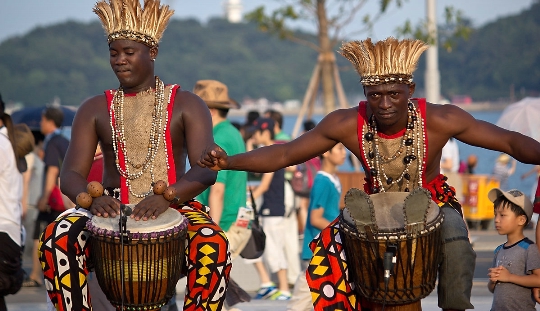 Every year Russian tourists more actively and fearlessly explore the black continent. Moreover, their interests extend far beyond traditional Egypt, Tunisia or Morocco. The most advanced travelers are already storming the southern hemisphere and studying the traditions of Angola and the customs of its locals..

Mask, I know you!

The tourism potential of this African country is truly enormous. Unique natural treasures, flora and fauna worthy of admiration and study, the original culture of local residents - all this invariably becomes a powerful magnet for attracting many travelers keen on exotic vacations..
A separate story is the folk crafts of the inhabitants of Angola. Carved wooden masks and stone figurines, stucco ceramics and wood fiber wicker items, jewelry and even works of contemporary artists - all this becomes original souvenirs, worthy gifts to relatives and friends.
Wood carving is an old and important tradition in Angola. This folk craft is not just a craft, but also a tribute to the gods. Masters put a certain meaning in masks and figurines, and such works often have magical significance according to the beliefs of local tribes..

Portuguese colonialists brought Christianity to the shores of Angola only in 1491. Prior to that, local tribes worshiped their own gods, and these traditions of Angola are still alive here today. Paganism and Christianity were closely intertwined and turned into a manifestation of a single culture, which so attracts Europeans here..
The Catholic majority in the country celebrates Christmas and Easter, while the Muslim community celebrates Ramadan. Here representatives of the Bahá'í faith and Buddhists live peacefully, and adherents of African religious cults still exist in the regions of the country far from the center. The brightest representatives of such tribes are pygmies. These people of short stature, like hundreds of years ago, continue to engage in hunting and gathering and worship the forest as the source of all the essentials for life..
Excursion to visit unique tribes in the south of Angola is like traveling in time. The Stone Age still reigns here and ethnographic expeditions provide an opportunity to get acquainted with the traditions of Angola, which existed long before the ships of the Europeans moored on the shores of the black continent..